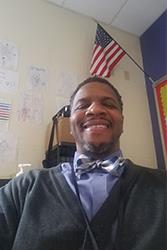 Michael Parks is a twenty-year educator in the CMSD. He was an Assistant Principal for four years, and a classroom instructor for 16 years. He has taught middle school ELA, Social Studies, Math and Science, and Pk-8 Math Intervention for the past two years. He has served as UCC Secretary, Subject Area Specialist for History, coached Chess and Boy's Basketball, coordinated the BRICK program, and facilitated the implementation of PBIS in two buildings.

He has partnered with several of the local branches of the Cleveland Public Library, where his scholars have performed oral debates and "We Are Royalty" presentations on their researched information about being a Pharaoh, along with showcasing their constructed pyramids and a created images.

This graduate of Tri-C, Central State University, and Cambridge College was nominated Mr. College of Education, inducted into Who's Who Among America's Teachers, and received "The Distinguished Leadership" and "The Optimist" awards for his professional contributions and positive attitude. Michael is the husband of Harriette, and the father of Alexis, Haley, and David.