NuCLEus Presentation to the Board of Education - August 8, 2017
Proposed Compensation Agreement
Proposed Board Resolution 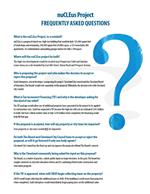 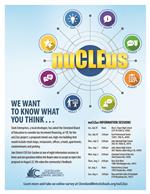 What is the nuCLEus Project, in a nutshell?

nuCLEus is a proposed mixed-use, high-rise building that would include 125,000 square feet of retail shops and restaurants, 200,000 square feet of office space, a 120-room hotel, 406 apartments, 36 condominiums and parking garage/surface lot with 2,100 spaces.

Where will the nuCLEus project be built?

The high-rise development would be located near Progressive Field and Quicken Loans Arena on a site bounded by East 4th Street, Huron Road, and Prospect Avenue.

Who is proposing the project and who makes the decision to accept or reject this proposal?

What is Tax Increment Financing (TIF) and why is the developer asking for this kind of tax relief?

The TIF package would allow use of additional property taxes generated by the project to be applied to construction costs. Stark has requested a TIF because the high rise will cost an estimated $542 million to build, but have a likely market value of only $250 million when completed; the financing would help fill that gap.

If the proposal is accepted, how will my property or city taxes be impacted?

Your property or city taxes would NOT be impacted.

Do both The Board and Cleveland City Council have to accept or reject the proposal, or will it go forward if only one body agrees?

Cleveland City Council has the final say and can approve the proposal without The Board’s consent.

Why is the Cleveland community being asked for input on this proposal?

The Board, as a matter of practice, solicits public input on major decisions. In the past, The Board has sought comment on citywide education reform and its continuing Districtwide construction and renovation program.

If the TIF is approved, when will CMSD begin collecting taxes on the property?

CMSD would begin collecting the additional taxes in 2048. If the building is worth more than projected when completed, Stark Enterprises would immediately begin paying taxes on the additional value.

What will the District get from this project during the 30-year TIF period?

Stark Enterprises will pay the District $18 million upfront. The District would put the money in its continuing building construction and renovation program and get $38 million in matching funds from the State.

What if the project does not reap its expected $250 million revenue? Will CMSD lose money?

CMSD is guaranteed to receive the $18 million and can still use that amount to leverage $38 million from the State for new construction and renovation projects.

How is CMSD gathering input from the community and how will that input be used?

The District will host eight information sessions, starting on Saturday, July 29 and ending on Sunday, August 6. Residents will be notified via direct mail, social media and media stories. All information will be posted on the District’s website. Feedback can be given in-person, online or via phone.

What happens to the $18 million offered to CMSD if The Board rejects the TIF?

If both Cleveland City Council and The Board say no, the District continues to collect $360,000 a year in property taxes currently paid on the parking lot, and the building will not be built.

What happens to the $18 million offered to CMSD if Cleveland City Council approves the TIF? -REVISED 8/9/17

NOTE: THIS WAS CLARIFIED EFFECTIVE WEDNESDAY, AUG. 9. Should the CMSD Board not respond to the notice letter issued by the City, the City Council could proceed to approve a 30-year, 10 percent exemption without any compensation to CMSD, other than to potentially share 50 percent of payroll taxes for new employees. Should the CMSD Board reject the proposed TIF, then City Council is limited to approving a 10-year, 75 percent TIF that does not require school board approval.

When will The Board review and vote on the TIF?

Will affordable housing be included in the residential portion of nuCLEus or will it be only market rate housing?

The residential portion will include only market-rate apartments and condominiums.

What percentage of the mortgage would the CMSD portion of the TIF pay?

Can Stark Enterprises use government bonds to finance the project or only private bonds?

Stark Enterprises is not seeking issuance of bonds by a public entity such as the City of Cleveland or the Cleveland-Cuyahoga County Port Authority in regard to the proceeds from the TIF. Stark will use annual revenue from the TIF to pay debt service on the mortgage. The TIF and proceeds create a future source of revenue to borrow against. Separate financing from Cuyahoga County may involve the issuance of bonds by the county for the project.

What were the terms of the TIF of the KeyBank deal?

What was Stark Enterprises’ initial offer to the district?

Stark Enterprises initially offered immediate payment of $2.7 million, plus payments of up to $180,000 per year and a scholarship program of $100,000 per year.

Is there a city ordinance regarding corporate tax abatement?

What is the annual projected revenue of rentals/etc. of the building?

The 406 apartments are expected to initially generate total gross rental income of $12,964,488 per year, beginning in 2021. Stark Enterprises documents price the condominiums at more than $1.2 million each, but revenue depends on sales. The company can lease unsold condominiums.

The council has not yet scheduled any meetings to specifically discuss the TIF.

How many floors are proposed for this building?

Stark would receive 100 percent abatement of property taxes for 15 years on the residential portion of the development.

How many parking spaces are available on the property?

The property is currently a surface parking lot with 650 spaces. The new facility would have 2,100 spaces.

On a regular basis, what percentage of property taxes go to the school?

What schools would residents of this development send their children to?

CMSD is a school choice district. Students can go to any school in the city if space is available or, in a few cases, they meet admissions criteria. Downtown schools include three high schools, Campus International, Davis Aerospace and Maritime and Cleveland High School for Digital Arts.

How can the School Board spend the $18 million?

The District can spend the money anyway it chooses, but the board would put the money into the District’s construction program and use it to build or renovate more schools. The state would provide $38 million in matching funds, for a total of $56 million.

What is the enrollment of the District today?

What type of business entity is Stark Enterprise?

They are a privately held corporation.

Has anyone conducted a cost/benefit analysis of the project?

How does the City of Cleveland’s Community Benefits Agreement fit into this project?

The District would work with the developer to implement a proactive strategy as called for in its Community Benefits Agreement policies.

How does the County assess the value of real estate?

Every three years the county conducts a comprehensive assessment of all real estate in the county. It is a multifaceted process that includes recent sales comparisons.

Did Stark Enterprises issue a deadline for the decision to be made?

The City of Cleveland provided notice to the District that it needed to respond to the city in approximately 30 days.

Can City Council alter the elements of the deal?

Has Stark Enterprises asked for or received TIFs from other Northeast Ohio school boards?

The Westlake schools approved a 30-year, 100 percent TIF for the portion of the Crocker Park project that includes the American Greetings headquarters. While the schools forgo taxes, they receive payments of at least $455,000 a year as compensation. The amount represents 25 percent of the taxes the schools would have received without a TIF and is to rise with valuation. There is a similar TIF agreement on a much smaller portion of the development. The majority of Crocker Park is not under a TIF. The Orange school district receives its entire share of property taxes for the ETON Chagrin Boulevard development in Woodmere.

What is the office vacancy rate in the central business district and overall in downtown Cleveland?

Has CMSD been affected by any other TIFs?

Is CMSD able to use its leverage to get the developer to make a community benefits agreement part of the project?

This is not part of the proposal currently being offered by Starks Enterprises. And because the District has to respond to the proposal on the table by the end of August, it is unlikely that the District will be able to include these additional opportunities at this time.

Isn’t it true that we lost the opportunity to leverage a community benefits agreement when we gave a TIF to the Q?

No TIF was given in the Q deal, and the District was not part of any negotiations on that deal.

What happens to our property taxes when the 30-year TIF “mortgage” expires?

Nothing. We continue to pay our property taxes. When the 30-year TIF expires, the owners of the nuCLEus property will continue to pay the taxes their property generates to be distributed to recipients that include CMSD, City of Cleveland, Cuyahoga County, Cleveland Public Library and Tri-C.

Can City Council stipulate that the 3,000 jobs the project would generate will be local hires?

Yes, City Council could negotiate a community benefits agreement as part of its negotiations with the Developer.

Have any studies been done to determine whether the value of property in Cleveland rises when projects like this go up?

How much tax money do we get from the hotel space in the nuCLEus project?

The property tax revenue from the hotel, as with the office, retail, and residential components, is included in the tax increment financing to be used to develop the property and to calculate the initial $18 million payment to CMSD and potential future payments.

How much sales or income tax could schools get?

The schools do not collect sales or income taxes. We collect only property tax.

Does the mayor weigh in on this proposal?

The mayor has not weighed in with regard to the Board’s decision to accept or reject the TIF. If City Council votes to approve the TIF, it will be sent to the mayor. The mayor could either accept City Council’s vote or and reject it by vetoing the Council’s vote.

Do you see a risk to CMSD's chances of getting another levy renewal if this proposal for tax abatement goes forward?

As with all levies, the District will have to thoughtfully educate taxpayers on any future levy and will need to include in that education information about the impact of this proposal, should it be approved.

Who are the other investors in this project, other than Stark Enterprises?

J Dek is an investor. Miscellaneous investors will contribute cash for the equity contribution. Stark Enterprises has not identified those investors and is not required by law to do so.

Is this something we can take to the ballot to get input from more of the community?

Additional input from the community can be provided to City Council, which is initiating the legislation for tax increment financing for nuCLEus and would create the TIF. CMSD is exercising a right under Ohio law to approve the TIF and enter into a compensation agreement or reject the TIF. Council approved legislation may be subject to referendum.

Can Stark use government bonds to finance the project or only private bonds?

Stark Enterprises is not asking a public entity to issue bonds that would be repaid with proceeds from the TIF. That does not rule out separate financing from Cuyahoga County.

Have a question or want to leave a comment?