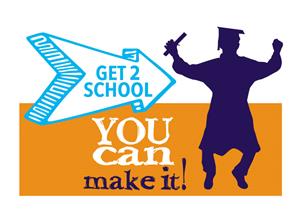 The “Get 2 School. You Can Make It!” campaign seeks to reduce the number of students who are chronically absent from school, defined as missing 10 or more days in a year.

When the first quarter ended Friday, just under 63 percent of CMSD students were on track to finish the school year with fewer than 10 absences. That was up from less than 59 percent averaged over the previous three years and represented an additional 1,700-plus students.

CMSD launched the “Get 2 School. You Can Make It!” campaign in July.

Since then, the campaign has spread its message with lawn signs, billboards, radio ads and automated calls to students from coach Mike Pettine and safety Donte Whitner of the Cleveland Browns, a major partner in the effort.

Volunteers have placed phone calls and visited the homes of students at risk of chronic absenteeism. Schools are running incentive campaigns to increase attendance.