CMSD student athletes took a big step in their education Wednesday and used their writing hands to do it.

Seniors accepted scholarships and committed to colleges and universities on National Signing Day. With proud and happy parents looking over their shoulders, they sat 30 abreast in the East Professional Center atrium and put their names on letters of intent.

Defensive lineman Daymon Williams and slot receiver Bryan West were among 14 players from Glenville’s football powerhouse to participate in the ceremony. They sat side by side, a symbolic pairing given that they have played together for the Tarblooders and will move on to do the same at Alabama State University.

“It’s just a bond we have,” said Daymon, a 6-foot-4, 240-pounder who will study sports medicine but hopes to make the NFL. “We made it this far; we’re going to keep going.”

John Hay defensive tackle Rickey Smith will go to Alderson Broaddus University in West Virginia with a backup plan of his own: majoring in business administration or accounting while minoring in entrepreneurism. He wants to launch a sports apparel line and call it Blue, a color he associates with happiness.

“It’s my favorite color,” said Rickey, who attends the John Hay-based Cleveland School of Architecture and Design. “It’s meaningful to me.” 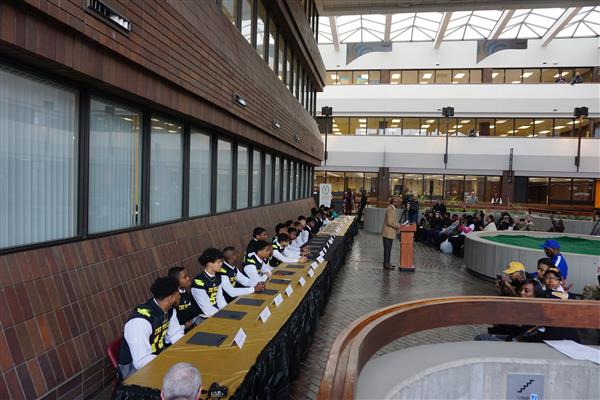 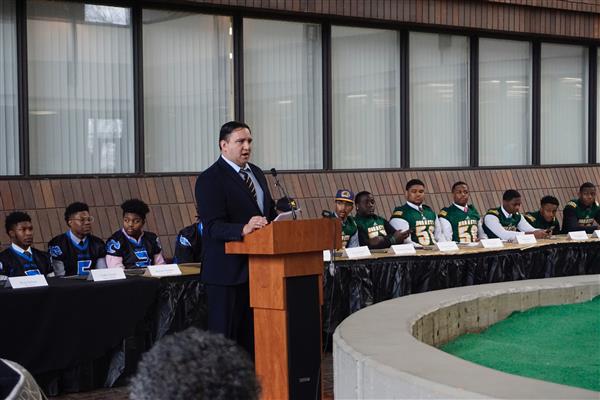 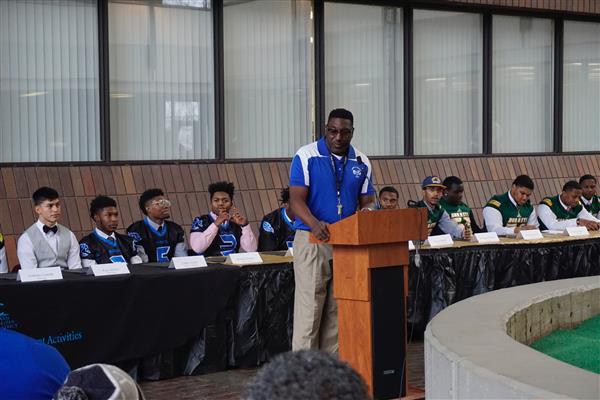 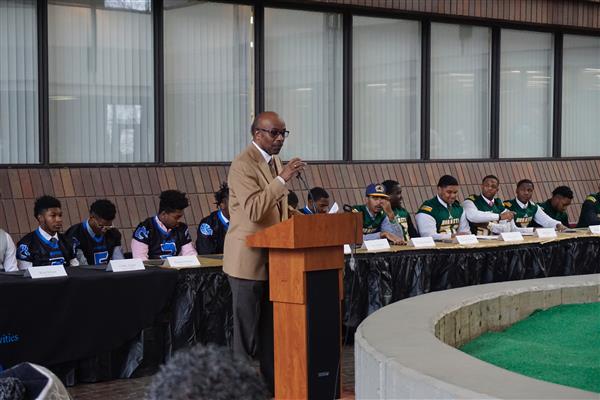 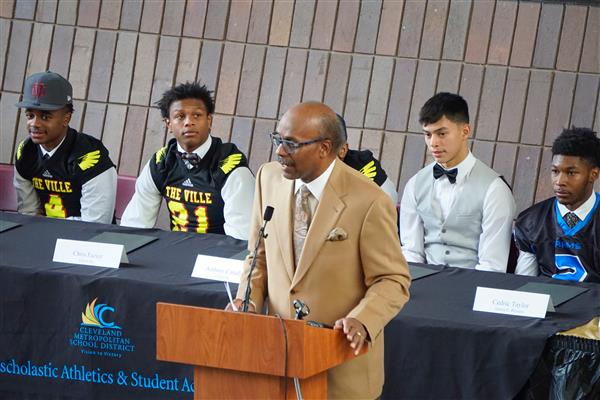 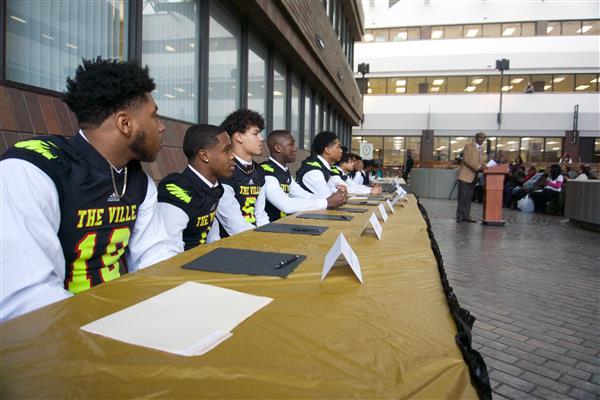 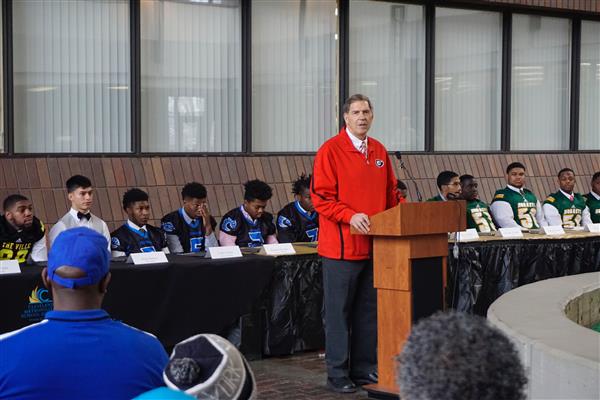 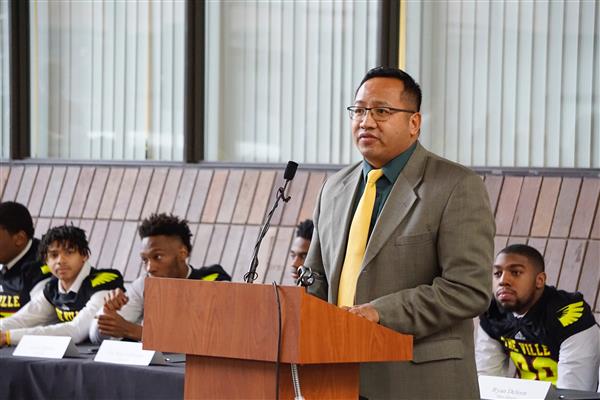 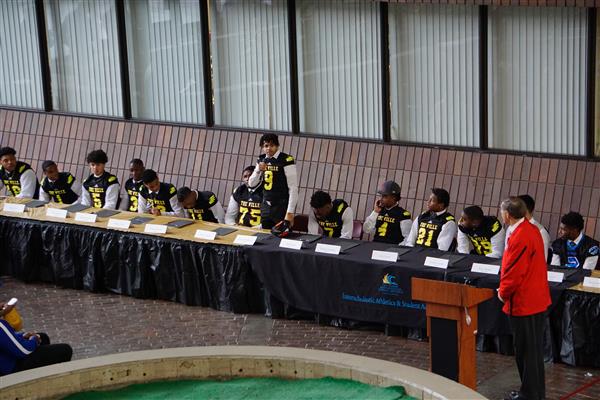 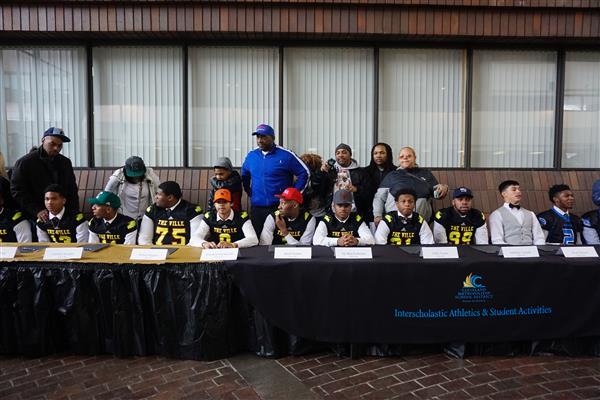 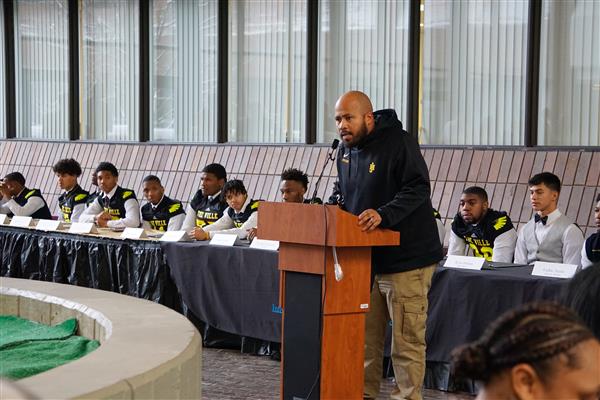 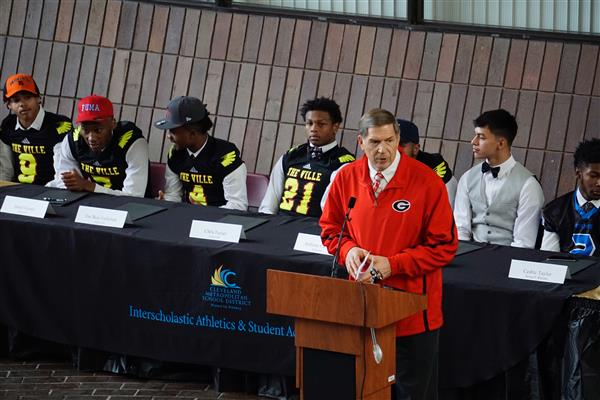 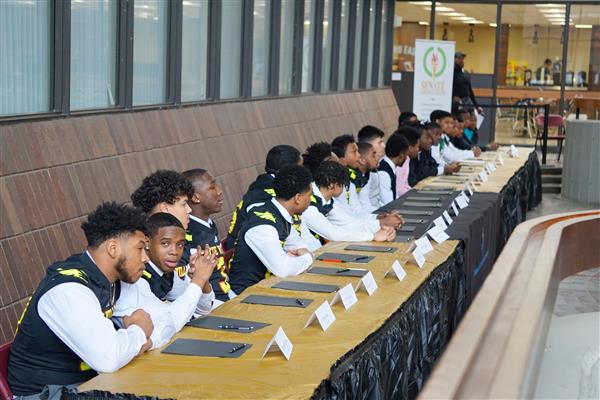 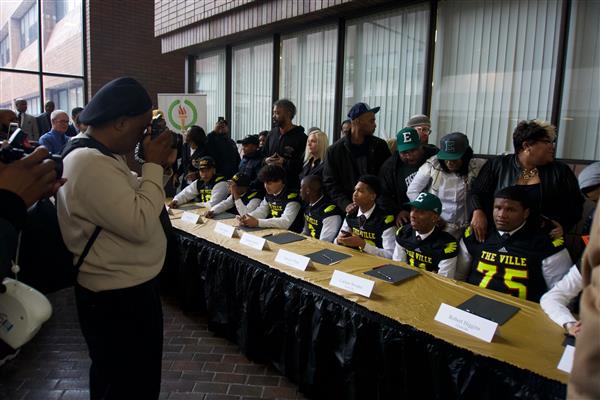 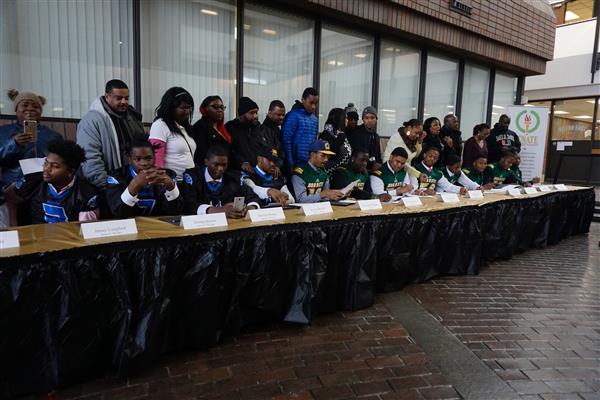 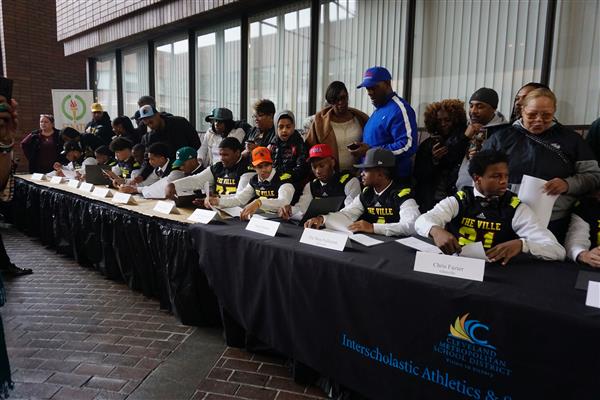 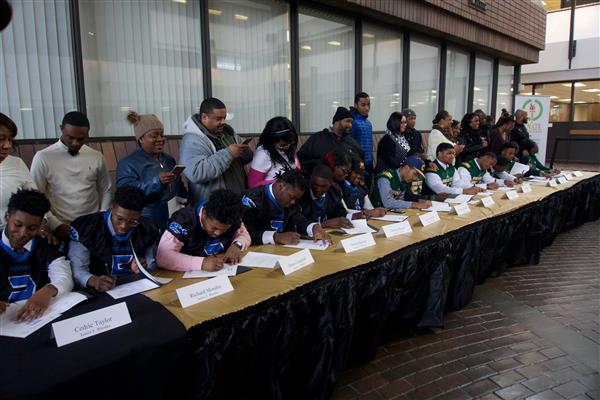 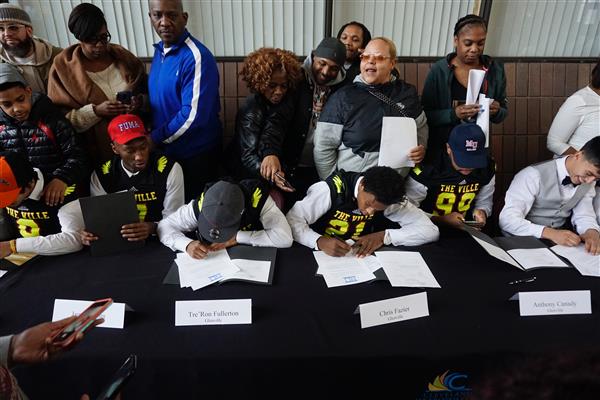 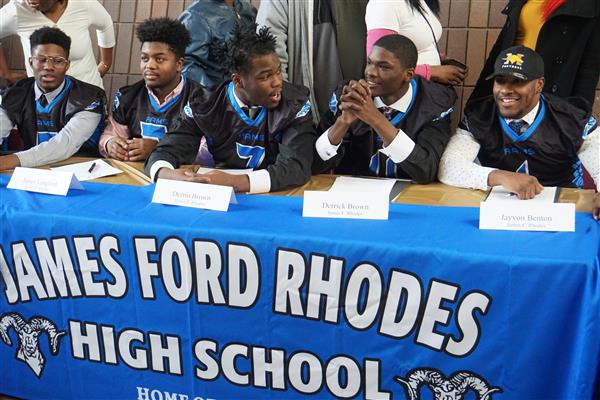 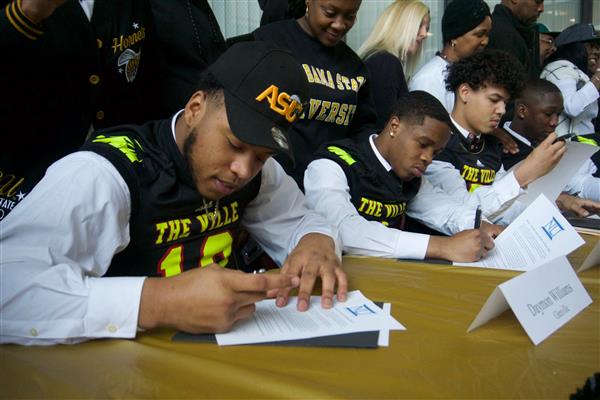 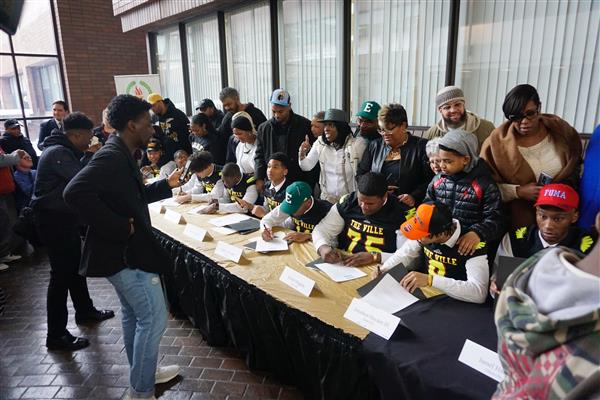 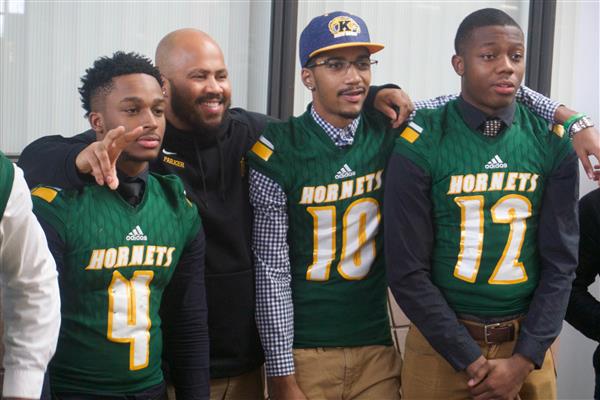 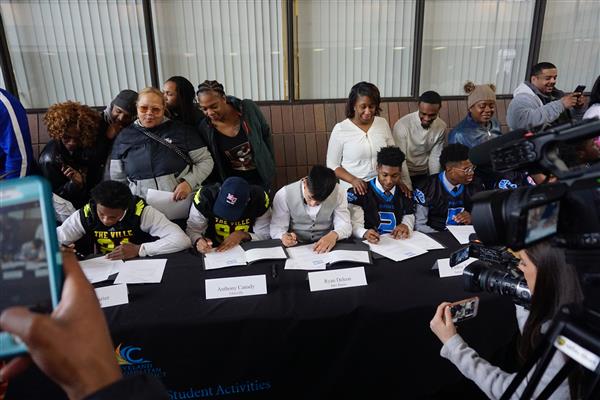 It was an especially meaningful day for Max S. Hayes High School, which was represented at signing day for the first time, according to head soccer coach Edward Gates. Two soccer players, Ryan Deleon and Racine Djigo, committed to attend Lakeland Community College.

For Ryan, playing college soccer will fulfill a childhood dream. He began playing soccer as a child after he was inspired by watching his father play the sport on a team with his friends.

“I learned most of my soccer skills as a kid from my father,” Ryan said.

From then on, it was hard work and intense training, combined with natural talent, that propelled Ryan to athletic success.

“I put all my effort into what I believe in and what I think is right for me, and the two things that matter most to me are school and soccer,” he said.

Ryan’s mother, Tamara Deleon, has been there every step of the way, watching Ryan's passion grow. She recalls her son smashing holes in the bottom of the garage door when he was a child to practice shooting goals with precision -- a renovation that Ryan’s dad fully supported.

“I’m very proud that he accomplished this,” Deleon said. “He’s been on this track since he was little.”

“Playing the game is going to end,” he said. “What isn’t going to end is their character. They will have it the rest of their lives.”

For Glenville assistant football coach Matt Chinchar, the signing day ceremony means much more than a commitment to playing college sports. Chinchar, who is also a college guidance counselor at Ginn Academy, where many players attend school, sees the students’ decisions as a victory against the myriad temptations that plague teenagers in Cleveland.

“There’s so many outside influences for our young people,” he said. “There are so many things trying to occupy their minds -- social media, stuff going on in the streets and struggles in their personal lives. So this is a win in the battle for our young people.”

See the full list of student athletes who signed letters of intent. -(pdf)