More than 40 high school football players ran, jumped and threw footballs Sunday at the Cleveland Browns Training Facility in Berea. The juniors were showing off their skills at a combine CMSD staged for recruiters from HBCUs and other colleges and universities.

“This is the first time many of our athletes have been to a combine.” said Desiree Powell, executive director for health, physical education, interscholastic athletics and student activities. “This is a great way for them to get exposure to college recruiters and hopefully receive a scholarship.” 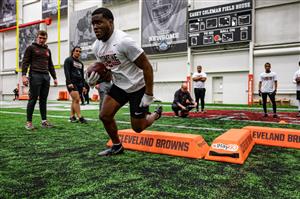 The players, all juniors, rotated through five different stations that included the 40-yard dash, broad jump and shuttle run. They also worked through passing drills.

This was an opportunity for recruiters from Historically Black Colleges and Universities and other institutions from across the country to see prospects who are ready to play at the collegiate level.

"I think it is good that the district is reaching out to help us get those scholarships especially to HBCU's," said Desmond, a junior at John Marshall School of Civic and Business Leadership.

Parents also attended the combine to learn more about the recruiting process from members of the Professional Football Players Mothers Association, a non-profit organization offering support to NFL players’ families. 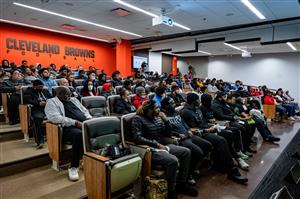 Nicole Ward spoke about what her son, Cleveland Browns defensive back Denzel Ward, went through to earn a scholarship from Ohio State University. She emphasized the importance of getting good grades as well as having athletic talent.

“Denzel gave 110 percent on the field, but he was an average student,” Ward said. “Coaches at OSU told Denzel that if he didn’t get his grades up, he wouldn’t be offered a scholarship.”

Denzel, who attended Nordonia High School in Summit County, never got a C grade again and was offered that scholarship, his mother said.

She also explained the recruiting process to families and told them what to expect after the combine.

“There is no playbook for this process,” Ward said.  “We are sharing our personal experiences to make it easier for the next families. We want to give back.”

Players can share their scores from the combine with recruiters who were not able to make the event.

CMSD will hold combines for softball, baseball and track and field in June.