Some Ginn Academy students are learning how to code. A computer skill most of them didn’t have before they started attending the Health IT in the CLE afterschool program.

“I learned many things about coding,"” said Jordon, an 11th-grader at Ginn Academy. “And how, anytime you want to start out a webpage you have to start with a HTML.”

For most of us, we just see the colors and words on a webpage but in order for it to look that way coding is required.

"If you want to design something, you can use CSS, which is basically a style sheet," said Jordon. "So, anytime you want to basically add color to your letters and anything else you need to use a CSS."

Grady Burrows, the director of health talent at BioEnterprise, a non-profit health care and bioscience business accelerator, runs the HIT in the CLE Community Classroom , afterschool coding program available to any high school student in Cleveland and surrounding suburbs. The classroom is a collaboration between BioEnterprise, the Cleveland Foundation and other community partners.

The goal of the program is to grow a talent pipeline for IT industries, including healthcare and biomedical in Northeast Ohio.

"It’s vitally important,” said Burrows. “Because the reality is that employers here in Northeast Ohio realize that if they don’t have a workforce that is not only capable and skilled but is diverse enough and reflects the fabric of Cleveland, they’re not going to be sustainable for long-term growth here.”

He said CMSD can fill the talent gap if they are exposed to computer science at a young age. 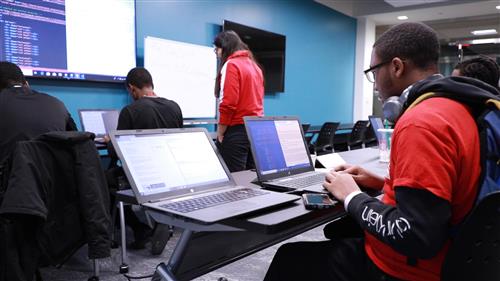 “When we talk about computer science or data science, they [the students] really don’t understand the application in today’s workforce,” said Burrows.  "It is important in so many different fields, including, medicine, business, law or even skilled trades. The students really have a big gap when it comes to understanding what computer science means and the relevancy in their world. Because quite honestly, there are not a lot of folks in their communities, in their neighborhoods that hold those jobs today.

Burrows wants to change that.  About 15 students from Ginn Academy, John Hay Campus and other CMSD high schools meet at least twice a week during the school year to learn coding and other digital literacy skills.

"Our goal here at the Community Classroom is to really energize and catalyze the high school students to excite them to really have a passion and grow their interest in computer science,” Burrows said.

He hopes many will continue to study computer science once they leave high school.

Jordon says he wants to make coding part of his career.

“I want to become an engineer,” he said.  “So, this coding class could actually improve my engineering skills, just in case I want to include computers with engineering.

And for those still deciding their career path, like Jalen, another Ginn Academy 10th-grader, this skill will also be useful.

“I think it gives me a one up on the world,” said Jalen.  “I can build web pages. I’m good with HTML, CSS and all that.”

For the last year, HIT in the CLE met at the Global Center for Health Innovation, but it moved this month to the BioEnterprise headquarters located in University Circle.