Board of Education renames three schools 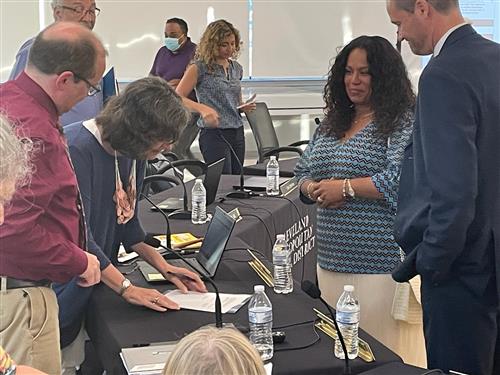 Natividad Pagan's daughter, Melisa, watches as school board Chair Anne Bingham signs the copy of a resolution renaming a school in her mother's honor.

The Board of Education has voted to rename three schools, the first to have their names changed under a review that the board commissioned a year ago.

Pagan’s daughter, Melisa, flew in from Florida for the meeting. She said having a school named for her mother was a “joy” and a “complete honor.”

“She put all her heart into her work, into the community,” she said.

Councilman Kevin Conwell advocated for the tribute to Tubbs Jones. He smiled broadly after the vote.

“Children have to see success every day,” he said. “They will get a chance to see that, to see pictures of her and aspire to be just like Stephanie Tubbs Jones.”

A work group began meeting last summer to  draft criteria for the names placed on schools and determine whether any current names needed to be reconsidered.

A historian researched the origin of the names of every school in the District, as well as proposed new names. The District collected feedback and suggestions for new names at community meetings and online.

The work group designated schools that it said deserved or should possibly receive additional review.