Home of the Mighty Scarabs

CMSD NEWS BUREAU
5/3/2016
Cleveland is home to a world championship team – in robotics.
A squad of 25 CMSD high school students joined forces with peers from three other cities over the weekend to win the FIRST Robotics World Championship in St. Louis. FIRST stands for “For Inspiration and Recognition of Science and Technology.”
According to its leaders, the Cleveland team is the first from Ohio to win the world championship since it was started 25 years ago. This year’s competition drew 640 high school teams from the across the United States and a number of other countries, including Israel, Canada, Mexico, Brazil, Australia, Turkey, Taiwan, China and the Czech Republic.

The CMSD unit is based at Cuyahoga Community College's Youth Technology Academy. Students returned there by bus on Sunday night and celebrated with teachers and their families.
George Bilokonsky, the academy’s founder and executive director, has coached District robotics students for 14 years and until now had come close to a world championship only once, with a team that reached the semifinals in 2007.
“It’s unbelievable,” he said Monday by telephone from a National Science Foundation conference in the Washington, D.C., area. “I haven’t really had a chance to take it all in.”
The team consists of students from MC²STEM, East Tech, Design Lab Early College, John Adams, John Marshall High School, the John Marshall School of Information Technology, the Cleveland School of Science and Medicine and New Tech West. It is officially known Cuyahoga Community College's Youth Technology Academy/Team 120, for a merger of a unit that competed under the academy’s banner and another once based at East Tech. 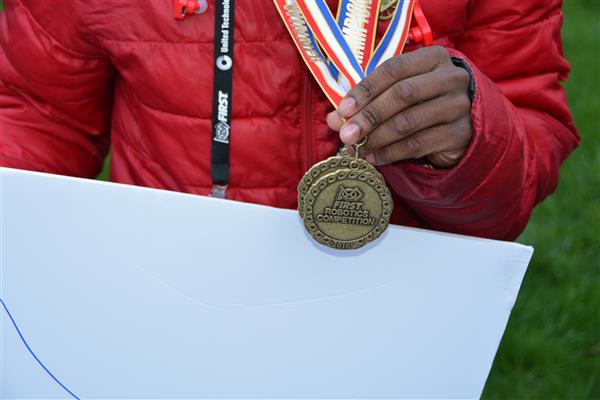 The CMSD team that competed in St. Louis was part of an “alliance” that also included teenagers from Hermosa Beach, Calif., Tremont, Ill., and Glen Allen, Va.
The students operated three robots at a time, while one was held in reserve. The competition, with a Monty Python theme, required the robots to knock down defenses, cross moats, open drawbridges, throw boulders and scale the walls of a plywood and acrylic castle that was maybe 15 feet tall.
Youth Technology Academy/Team 120’s robot stands as high as 6-foot-4, weighs 114 pounds and rests on a base measuring slightly more than 2 square feet.
Tri-C’s academy was created 14 years ago to provide CMSD students with access to modern technology. Staff, many of whom are District teachers serving as adjunct college faculty, work in more than a dozen high schools.
This academic year, teachers assisted more than 1,000 high school students who built robots, had fun and engaged in competition while also getting a chance to earn college credit. More important, the students developed skills in the field of STEM, which stands for science, technology, engineering and mathematics.
“There’s a huge untapped pool of talent in our District,” said Mary Kay Bitterman, director of technology academies at Tri-C. “Technology is ever changing and always expensive. We thought this would be a good niche for us to fill.”
Bitterman said 42 percent of the CMSD students enrolled in the academy are female. That level "is unheard of" in STEM, she said.
The OhioMeansJobs workforce development program and the National Science Foundation provide major funding for the academy.
NASA and Rockwell Automation lead funding for the FIRST Robotics team, which is Bitterman said is 10 NASA “house teams” in the country. NASA representatives mentor team members.
Excitement from the global conquest lingered Tuesday, and Bitterman said it showed no signs of abating.
“I think it is going to have some buzz around it for a while,” she said. “And it should.”