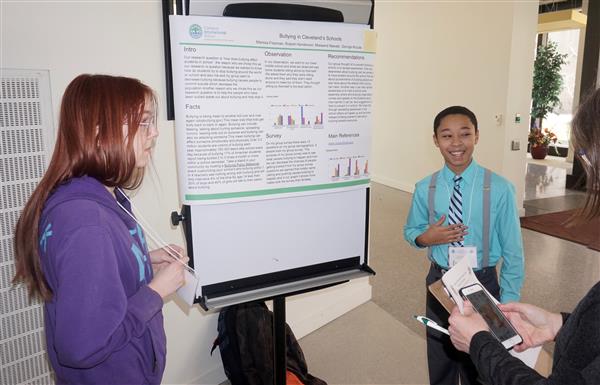 Campus International High School ninth-graders presented their posters to the community at the Youth Research Symposium at Cleveland State University.

Students in the inaugural class of Campus International High School have taken their first steps as researchers contributing to the Cleveland State University learning community.

The ninth-graders last week presented original research projects about issues in their community during the first-ever Youth Research Symposium at CSU. The event was the culmination of months of gathering and analyzing data about topics like human trafficking, the gender pay gap, racism and poverty in their own neighborhoods.

Molly Buckley-Marudas is a CSU assistant professor and professor in residence at Campus International High School. She wrote the curriculum and designed lessons around the project, which began in the fall.

“The most exciting part is that the kids are seeing themselves as knowledge generators in the community and realizing that they can take steps to solve the problems they see," Buckley-Marudas said. "They don’t need to wait for someone else to do something."

In groups of three to five, students collected raw data using various methods, including conducting surveys. CSU faculty members and students in the university's education program helped with the research.

For some groups, the project is extending into action that will make an impact. Students who studied the challenges of homeless people in Cleveland learned that areas surrounding shelters are often unwelcoming and unsafe. The group linked up with Campus District Inc. and residents of the Norma Herr Women’s Shelter and are working to revitalize a portion of Payne Avenue near the shelter to make it more welcoming.

Purple Films, a local creative studio, created a video to document the project. The students are raising money for public art installations, landscaping and other improvements through the ioby crowdfunding site.

The project is the first step in a progression of four years of research courses, CIHS Principal Ameer Kim El-Mallawany said. It's also a larger scale version of a project that fifth-graders at Campus International K-8 students complete. The fifth-graders visited the symposium to see what will be expected of them in high school.

“We want the students to envision themselves as college students and lifelong learners,” El-Mallawany said.

The principal also hopes the experience will shape students’ perceptions of their school’s partnership with CSU.

“We want them to see themselves not as beneficiaries of CSU, but as part of that learning community where they're contributing their own knowledge and skills,” he said.

During the symposium in the atrium of CSU’s Julka Hall, CIHS and university faculty, community partners and fellow students evaluated each group’s project and provided feedback using a form. The attendees also participated in roundtable discussions that allowed for deeper reflection on the projects. They also had the chance to nominate two groups for awards that were presented after the event.

The students who won the award for best poster (the poster that most effectively communicates the focus and results of the research executed) were Hannah Fluker, Brittny Hines, Danielle McCoy and Malasia Vaughn. Their research focused on young people's perceptions of bullying towards LGBTQ youth.

The award for best community project (the project that will have the greatest impact on the community) was given to Marissa Freeman, Robert Henderson, George Klouda and Maiwand Nawabi for their research on bullying in Cleveland's schools.

Ifeoma Ezepue visited the symposium to support her daughter, Adora, whose project was titled "Teenage Pregnancy: Challenges and Reality." Ezepue said she was amazed by the quality of the students’ work and impressed by the collaboration with CSU.

“This is giving them a huge leg up by exposing them to the fact that everything is data driven nowadays,” Ezepue said. “What a skill to gain at the high school level.”