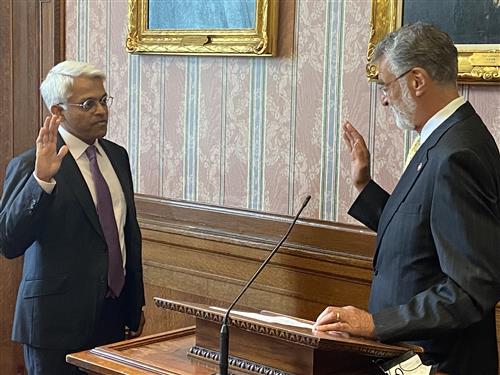 Then-Mayor Frank G. Jackson swears in Nigamanth Sridhar as a new member of the Board of Education on July 1, 2021.

Cleveland Board of Education member Nigamanth Sridhar has been named interim provost and senior vice president of academic affairs at Cleveland State University, effective May 9.

Sridhar has been on leave from Cleveland State since April 2020, working with the National Science Foundation as a program director. He joined the university in 2004 and was a professor of computer science before becoming dean of CSU’s College of Graduate Studies in 2017.

He joined the school board last July but had an impact on the District well before then.

Sridhar has been part of the “CS for All” movement, started from scratch about nine years ago with the goal of giving every CMSD student, kindergarten through 12th grade, access to computer science.

He was also a founding member of the advisory board at CMSD’s John Marshall School of Information Technology, which was the first public high school in Ohio focused on computer science when it opened in 2015.