Their shirts and shorts both have a silhouette of Jesse Owens, an East Tech High School graduate and Olympian, in a running stance.

“It feels good to have a legend on our shirts,” said Raymeir, an 11th grader on the Rhodes track team. “We get to represent him at the Senate championship.”

DistrictWON, the Cleveland-based company that launched senatelive.com to stream CMSD sporting events, donated the uniforms to the teams.

“The kids within CMSD could not have a better role model than Jesse Owens,” says Peter Fitzpatrick, CEO and president, District WON said in a press release. “The kids should feel a real connection to him in so many ways.”

Students feel honored to have the Jesse Owens logo on their uniforms. 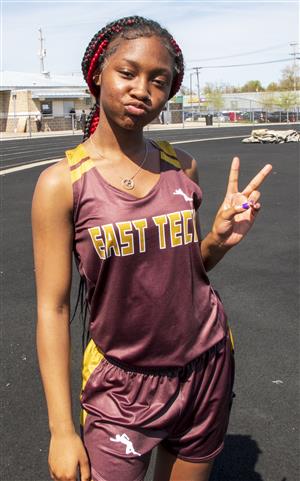 “I am proud that he went to my school,” said Javae, an 11th grader who runs the 100-meter at East Tech. “Now we get to represent him at East Tech.”

Owens graduated from East Tech High School in 1933.  He at trained at Rhodes High School. He went on to tie the world record in the 100-yard dash (9.4 seconds) and set two national high school records, one in the 220-yard dash (20.7 seconds) and the other in the long jump (24 feet 11 ¾ inches), all while in high school.

He also won gold medals in the long jump, the 100- and 200-meter dash and the 4 x100 meter relay at the 1936 Berlin Olympics. He was the first African American to win four gold medals at a single Olympics.