Students in Peggy Gill’s 4th grade class saw an issue near their school, Almira PreK-8 Academy, and wanted to do something about it.   The issue? Trash at the corner of West 99th Street and Almira Avenue.

“There is a lot of litter around our school,” said Mibella, one of the fourth graders.

“There is a lot of plastic bags and garbage. It is bad,” added Brooklyn, who also was in the fourth grade during the past school year.

The class decided to do something. They wrote letters to Cleveland City Councilman Brian Mooney. 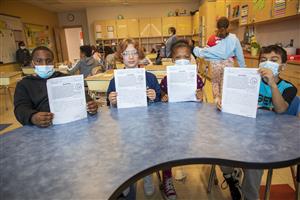 “Dear Mr. Mooney. Our class is worried about pollution around our school. Can we have a permanent trash can at the corner of 99th and Almira,” the students wrote.

Mooney said their request was easy to fulfill. 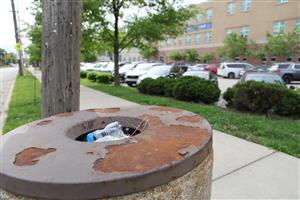 “I immediately called our sanitation department, and I asked the city to place a garbage can on the corner,” said Mooney, the councilman for the city’s Ward 11. He later stopped by their classroom to speak to the students about how government works and encourage them to continue using their voices.

Gill said her students learned an important lesson in civics.

“They now know change starts with you,” said Gill, who has been teaching for 30 years. “Now they know that even if it's just picking up a piece of litter, they can make a difference in the community.”

The students were excited that the councilman listened to them. After the trash can was delivered, they immediately cleaned up the area.

“I feel very happy, and I feel very proud at the same time,” said Yevian, one of the students. ‘There was a lot of pollution there.”