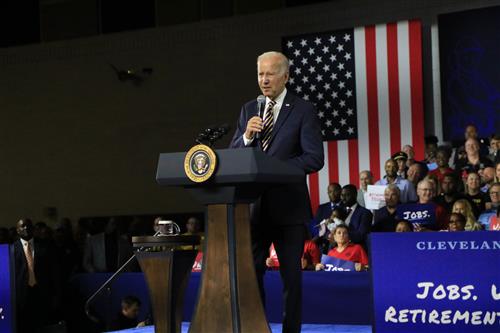 The spotlight that follows President Biden widened to take in Max S. Hayes High School when the president visited Wednesday.

The career technical school provided a fitting backdrop as Biden spoke about a program that will keep multiple-employer pension plans solvent and guard against deep cuts in benefits for union members enrolled in the plans. The program will be funded by the American Rescue Plan.

“This school has programs in three industries that drive the economy – building and construction, manufacturing and transportation,” said Keith Laschinger, executive director for the Friends of Max Hayes. “The location is well chosen.”

Biden was joined on stage in the gym by Mayor Justin Bibb, U.S. Secretary of Labor Marty Walsh, Sen. Sherrod Brown, House Ways and Means Chairman Richard Neal and U.S. representatives Marcy Kaptur and Shontel Brown. The gym was filled with members and retirees from unions that included the Ironworkers, Teamsters and Laborers.

Max Hayes, located at W. 65th St. and Detroit Ave., was founded in 1950 and now occupies a modern building opened in 2015. Enrollment numbers more than 500 students.

In May, the Friends of Max Hayes organized the school’s first-ever trades fair. The fair brought together representatives of industries in need of skilled workers and students preparing for jobs in those industries.