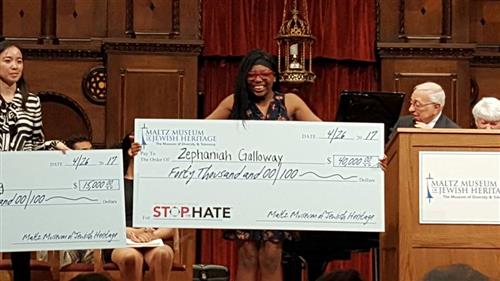 Zephaniah was chosen from a pool of 1,700 juniors and seniors, from both Northeast Ohio high public and private schools, who competed in the annual competition sponsored by the Maltz Museum of Jewish Heritage. It was the most entries the contest has ever received.

The announcement was made Wednesday after Zephaniah read her essay in front of a panel and an audience at the Maltz Performing Arts Center at Case Western Reserve University. Cleveland Early College High School received a $5,000 anti-bias education grant because Zephaniah attends the school.

Galloway’s essay delved into the challenges of growing up as a black girl who doesn’t fit into “well-known stereotypes about what it meant to be black.” She wrote about the journey that led her to embrace herself as she is.

What does it mean to be black?” she writes. “Is it the way my skin absorbs sun rays? Is it the way my hair twists and turns like the Nile River in the land from which my ancestors were stolen?”

The essay ends with Galloway describing her work as an activist who she hopes will help others who are disadvantaged.

Centering on an anecdote about a time his class attended a STEM (science, technology, engineering and math) convention, Jeremiah writes about how he feels the need to “work twice as hard and be twice as smart” to earn the same respect that is given to white students.

Newton D. Baker School of the Arts was also a big winner, earning $10,000 for their students’ Stop the Hate entries.

Newton D. Baker sixth-grader Curt Harris III earned third place in his division for his essay about how gender stereotypes affected his life. He writes about being teased for being a boy who doesn’t like basketball or wearing a pink shirt and questions why gender norms are so restrictive.

Each of the winning and finalist essays and the lyrics to the Newton D. Baker students' song can be read on the Maltz Museum's website.

This was the biggest year yet for the Stop the Hate contest, with nearly 3,300 entries from sixth- through 12th-graders in Greater Cleveland. The contest aims to empower students to become change agents and speak out against injustice. Each year, the Maltz Museum of Jewish Heritage gives out $100,000 in scholarships, awards and anti-bias education grants.

Maltz Museum spokesman Jeffery Allen said he and the panel of judges were impressed with all the CMSD finalists, particularly Zephaniah’s reading.

“To be selected as number one out of 1,700 is phenomenal,” he said. “She managed to keep people thinking and laughing at the same time. Zephaniah is a shining example of the great work schools are doing and how much faith we can have in humanity, knowing that young people like her will be leading the way someday.”
Disclaimer Text
Disclaimer Text
Copyright © 2002-2020 Blackboard, Inc. All rights reserved.