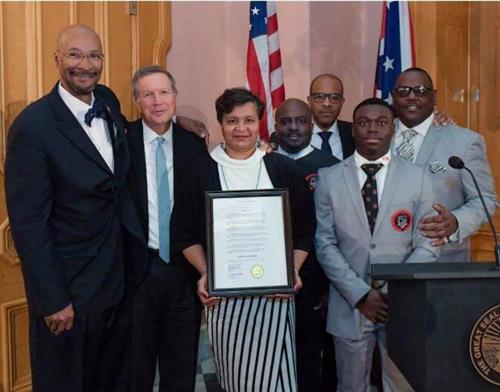 CMSD NEWS BUREAU
2/27/2017
The unique educational model at Ginn Academy has caught the attention of Ohio Gov. John Kasich.
The governor recently chose Ginn Academy, believed to be the only all-male public high school in the state, to receive a Governor's School Innovation Award. He also invited representatives from the school to a ceremony at the Ohio Statehouse.
Ginn Academy was one of only seven Ohio schools, districts and school networks selected for the award. The other winners are Bio-Med Science Academy, Cristo Rey Network High Schools, Dayton Early College Academy, Marietta City Schools, Marysville School District and Toledo School for the Arts.

Kasich held up these schools, districts and school networks as examples for others to look to as models of success.

“I want to do this bottom-up and look at the incredible things that some of these schools are doing and get ourselves in a position where everybody can copy certain pieces of what it is that they do,” Kasich said.
The Ginn Academy delegation that consisted of founder Ted Ginn Sr., Principal Nicholas Petty and several others had the chance to discuss the school with Kasich and answer his questions. Petty explained the school’s 24-hour-a-day, four-year-long “life coach” mentoring program and the school’s recent push to help students develop skills needed to enter the workforce.

Ginn Academy has partnered with manufacturers and other corporations, including Forest City Enterprises, to bring training right to the school, Petty said.

“We have some students going to college and some going to the workforce, so what we’re doing is bringing the workforce into the school, and they’re learning all these skills within the school,” Petty said.

Petty also discussed a partnership with the Northeast Ohio Regional Sewer District, which provides internships where students learn to test water for signs of pollution. Opportunities like these are funded in part by a $250,000 grant the school received last year from KeyBank.

The school’s four-year graduation rate was 94.4 percent last year, even higher than the District's rising 69.1 percent average. Students received more than $3 million in college scholarships and 83 percent of graduates went to college or enlisted in the military, Petty said. The school helped find jobs for students who didn’t go to college, he added

Ginn Academy senior Demerius Wynn, who attended the ceremony, told Kasich about his accomplishments in athletics and academics. Wynn is enrolled in the High Tech Academy program at Cuyahoga Community College that gives CMSD students the opportunity to take college classes while still in high school. Wynn expects to graduate in the spring with both his high school diploma and an associate degree and plans to attend Morgan State University on a full scholarship.

The school also brought along life coach Antoin Eley to tell the governor about the significant role that mentors play in supporting students' academic and emotional well-being.