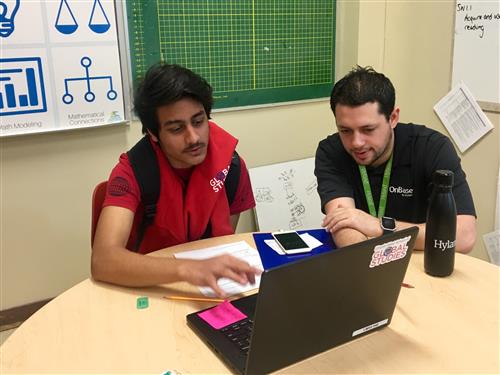 Kahoon has been at the Lincoln-West Campus for the past four years, teaching math and science and working as a personal learning coach for teachers at the School of Global Studies after the small school opened at the campus in 2016. It wasn’t until the TEALS program came to CMSD that she discovered a passion for teaching computer science.

That’s exactly what TEALS, which stands for Technology Education and Literacy in Schools, is intended to do. The program, supported by Microsoft Philanthropies, is helping CMSD high schools create a pipeline of capable computer science educators by partnering classroom teachers and tech professionals to teach rigorous computer science courses.

Kahoon is currently teaching AP Computer Science Principles to sophomores. She attended training through Cleveland State University, a partner in this initiative, to learn the basics of computer science and help build her curriculum. She is not in it alone; each day, one of two software developers for OnBase by Hyland are in the classroom with her.

Kahoon handles about 80 percent of the teaching, but the volunteers from Hyland are there to provide real-world context for the lessons.

Two mornings each week since August, Hyland software developer Ariel Koiman has been at Global Studies providing classroom support to Kahoon and her students. Hyland is one of the country’s leading tech companies.

So far, they’ve delved into foundational concepts like how the Internet works and how data is transferred. They recently introduced some low-level coding using Alice, introductory programming software.

“What we’re doing is giving students perspective into what the field of computer science entails and broadening their worldview because technology is becoming increasingly prevalent in every field,” Koiman said.

The purpose of the class, and Koiman's role, is to demystify the field of computer science and open students’ eyes to career possibilities in tech.

“As someone who works in software development, I’m able to address head-on how we, as developers, actually use this technology,” he said.

TEALS was launched in 2009 and has reached more than 350 high schools in 29 states. Cleveland is the only school district in Ohio using this model to increase its computer science teaching capacity, which is why officials from the Ohio Department of Education stopped stopped by last week to check it out. They visited Global Studies, Cleveland School of Science and Medicine and John Marshall School of Information Technology.

Buddy Harris, director of the ODE Office of Innovation, said the visit was a way to broaden how Ohio looks at the challenges of 21st Century education, and specifically how to prepare students to fill jobs of the future.

“The state typically approaches things through one particular lens -- creating this big licensure process -- which is not flexible enough to address the needs of a changing work environment,” Harris said. “It requires us to think a little bit differently about what we do and the only way we can do that is to get exposure to programs like this that are approaching the problem in a different way than we’re accustomed to doing.”

TEALS is a response to both economic and social needs. The United States faces a severe shortage of qualified candidates for computer science and computer engineering jobs, and Microsoft wants to make sure that underrepresented groups have an opportunity to enter the field, said Nathaniel Granor, lead program manager for TEALS in the eastern half of the United States and Texas.

According to the TEALS website, employers will create 1.4 million computer science-related positions by 2020, but the supply of qualified college graduates will fill only a third of those positions. Ohio has more than 15,000 vacant computer jobs that pay an average of nearly $80,000, well above the $44,750 average for all jobs in the state, according to the website code.org.

Holly Lavender, the STEM education lead at the ODE, was also part of the visiting group. She said that aside from a dearth of educators equipped to teach computer science, there is also the challenge of keeping up with the ever-changing field to ensure lessons stay relevant.

“Computer science is a field that changes very quickly, and so it’s difficult for teachers to keep up with all those changes,” she said.

That’s why it helps to have a volunteer who can bring on-the-job knowledge directly to students.

The day of the ODE visit, students were catching up on various projects. A sophomore named Ashley was working on writing code to make virtual video game characters dance. She said she was surprised at how much intricate work went into even small movements.

“I’ve learned that, in some ways, computers are more frustrating than people,” Ashley said.

The yearlong course is designed to be rigorous. To get college credit from the College Board, Ashley and her classmates will have to submit a portfolio, write a research paper on issues in computing innovation and earn a passing score on the AP exam.

At first glance, a class focused heavily on technology might not seem feasible for CMSD students who don’t have access to a computer or a reliable Internet connection at home, including most of Kahoon’s students. But the course is designed so that homework assignments don’t require going online.

When they are at school, each Global Studies student has access to his or her own laptop, which the computer science students use daily. It was Kahoon’s passion for helping implement this one-to-one technology initiative that led Principal Irene Javier to enlist her for the computer science class.

"The way TEALS works is that there's someone like [Kahoon] in every school who might not have a computer science background, but has the passion," said Jake Taylor, the Ohio TEALS regional manager.

TEALS aligns with CMSD's commitment to bring high-quality computer science classes to all students. The Cleveland Foundation launched the CSforAll - referred to by some as CS for CLE -initiative last year with CMSD, Cuyahoga County, Cleveland State University and Envision Excellence in STEM Education. The goal is to make computer science instruction available in all of the District’s high schools within three years and eventually expand the subject to lower grades.

Now that she is a few months into it, Kahoon has become enthusiastic about computer science and is already brainstorming how the program will develop at Global Studies over the next few years.

Koiman and Kahoon make a good team, and Koiman has even offered to help Kahoon build on her existing knowledge to prepare to teach AP Computer Science A, a more difficult course.

“[Koiman] is always tells me he’s ready to teach me Java when I’m ready to start,” Kahoon said, referring to the Java coding language used in more advanced programming classes.

“Having volunteers that are willing to work with me, even though they may not be the people teaching the course with me in the future, has been helpful,” she said. “They want me to be prepared for that and be successful. It’s good to have people that think you can do it.”