Say Yes to Education has selected Cleveland to be its fourth chapter. This CMSD-TV was played as an introduction to the official announcement Friday at the John Marshall Campus.

Cleveland has become the fourth chapter of Say Yes to Education, a historic development that will bring college scholarships to CMSD students while also providing services designed to keep them on track to graduation.

For a city with the nation’s second highest rate of child poverty and a low percentage of college graduates, the move promises to be a game changer. Besides opening doors for students who may have once dismissed post-secondary education as unaffordable, creating Say Yes Cleveland has the potential to attract new residents and spur economic growth.

Philanthropist George Weiss, who founded the national nonprofit Say Yes organization 31 years ago, announced Cleveland’s selection Friday at the John Marshall Campus. Students who packed the gym stood and cheered, while others saw the event live-streamed in an overflow area and high schools across the District.

"Say Yes to Education is the right thing at the right time for the Cleveland schools, for the city of Cleveland and for you," said Mayor Frank G. Jackson, who joined other community leaders in applauding the news.

How the scholarship plan works

Starting this spring, students can receive up to the full value of tuition, minus federal and state aid, for any public two-year college, four-year college or Pell-eligible technical program in Ohio.

Scholarships also can be used at the more than 100 private colleges and universities that belong to the National Higher Education Compact. The names of 12 new compact members were announced Friday, including local institutions Case Western Reserve, John Carroll, Baldwin Wallace and Notre Dame.

The scholarships can be used only for tuition, not for expenses such as housing, books and meals.

Recipients must live in the District and attend CMSD or partnering charter high schools. Current high school students who maintain residency can qualify, but starting with the Class of 2023, recipients must have been enrolled continuously from ninth grade through graduation. 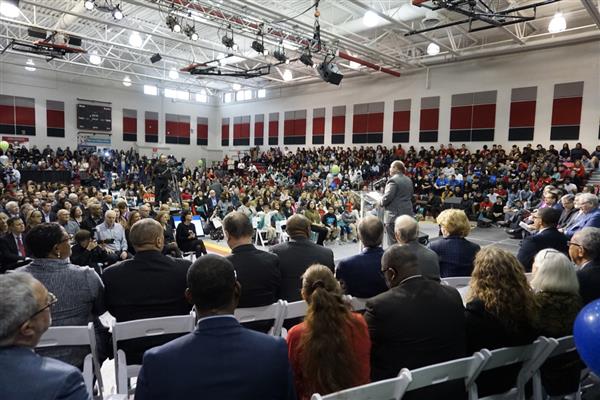 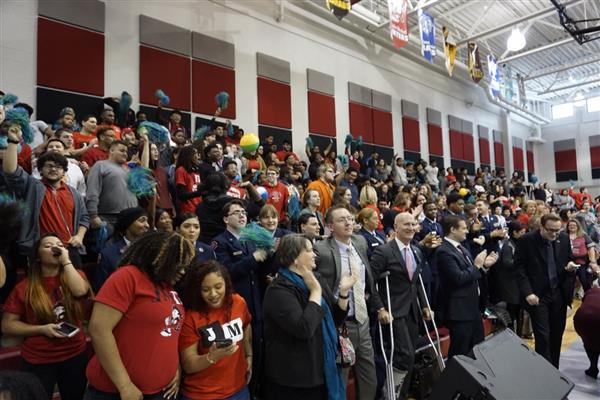 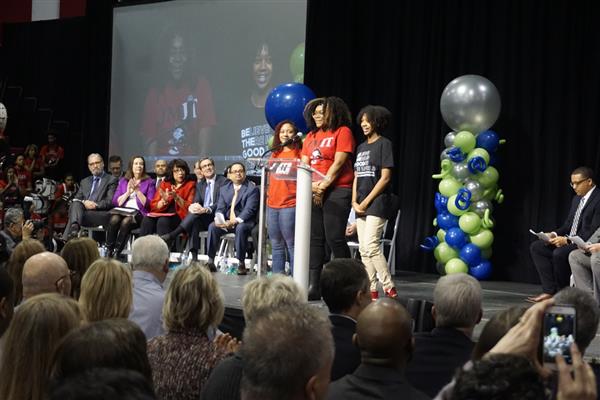 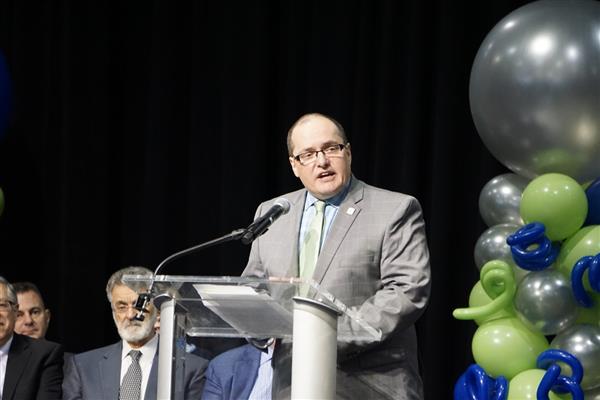 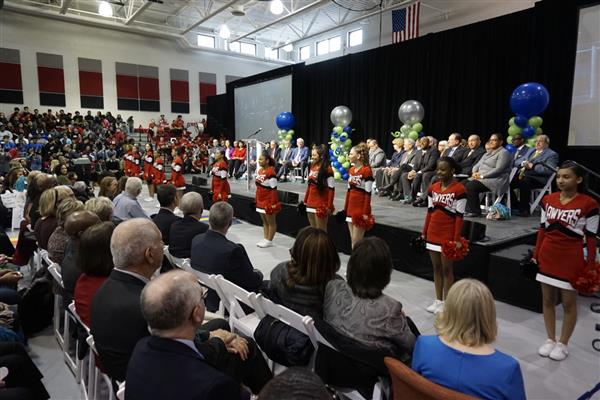 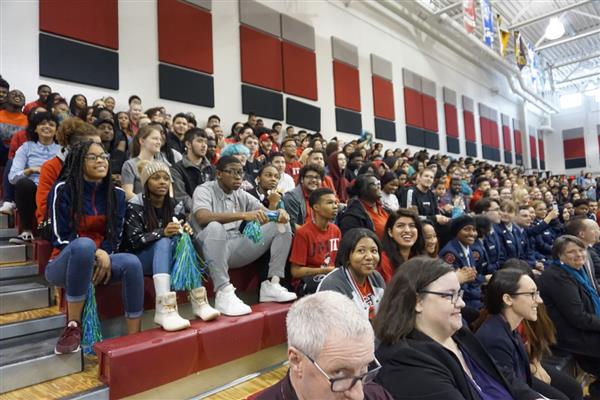 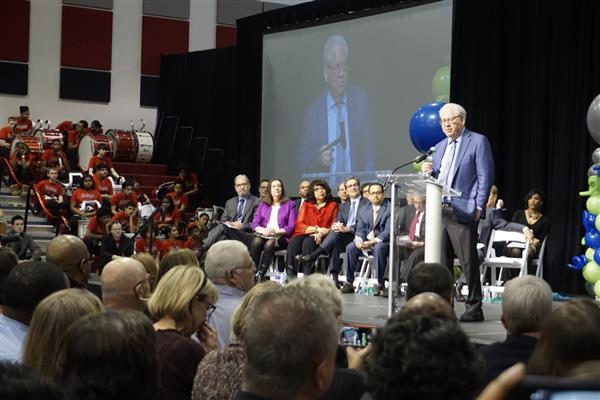 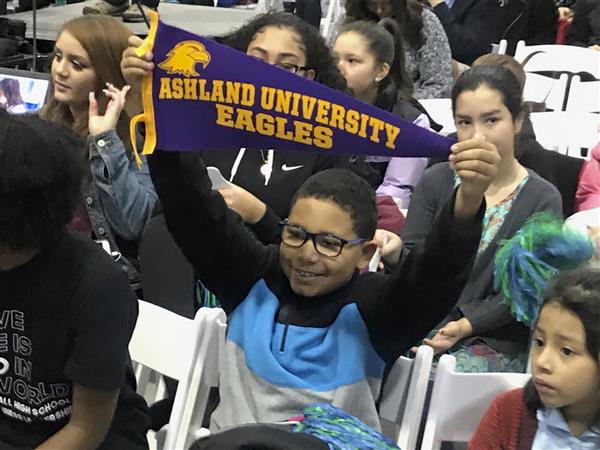 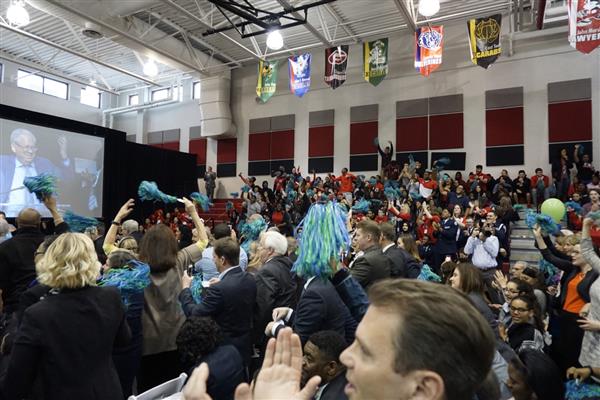 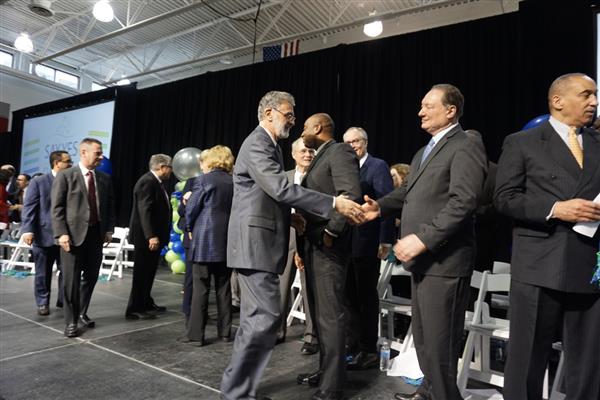 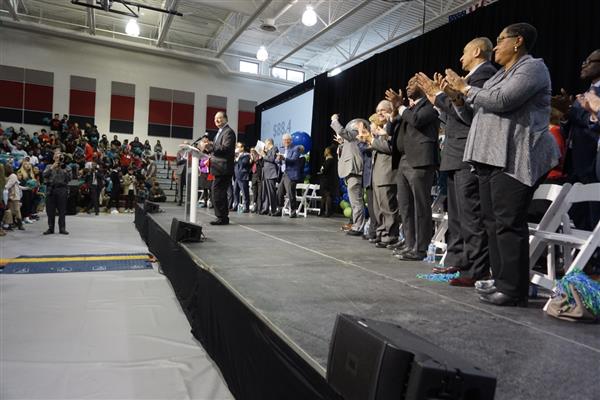 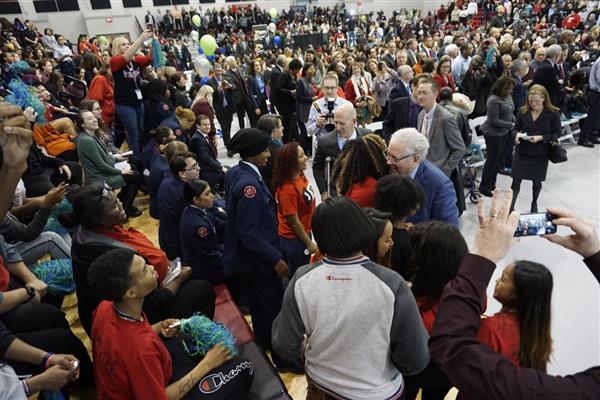 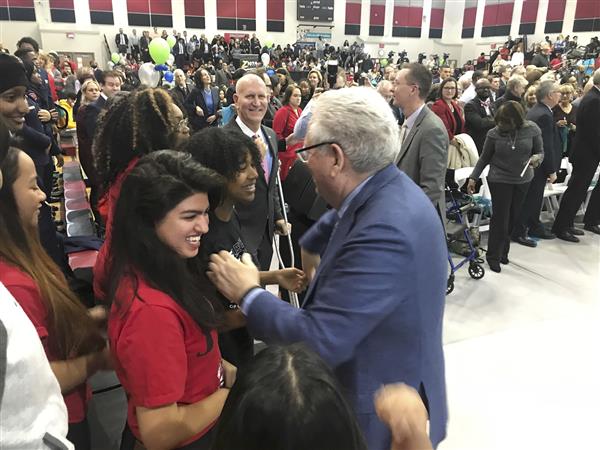 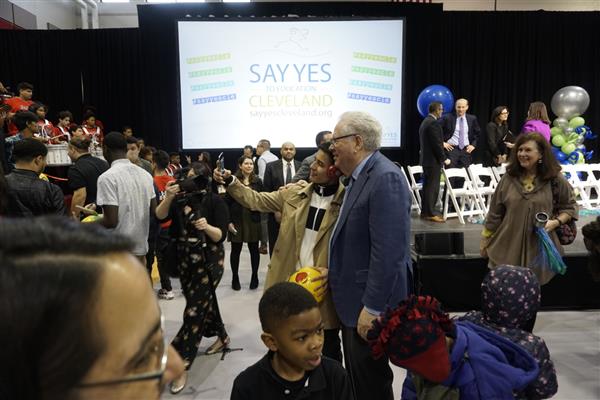 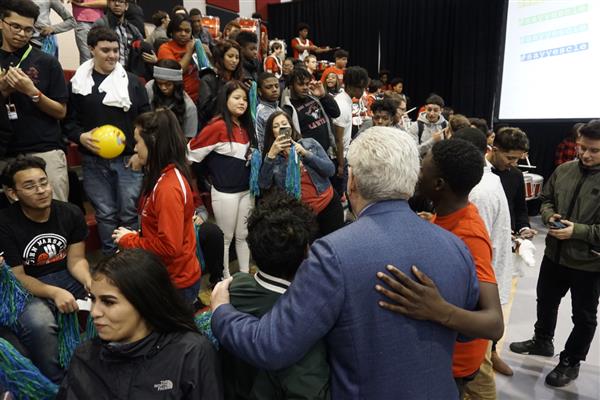 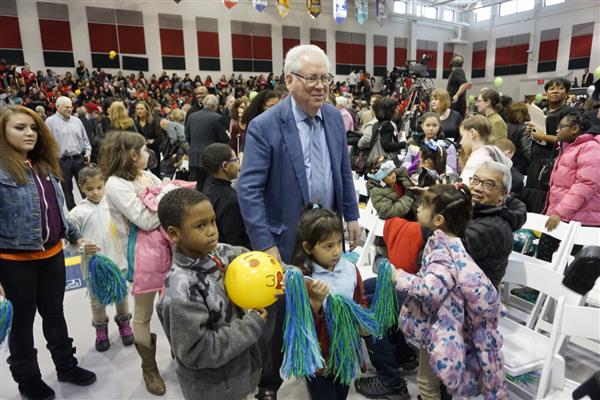 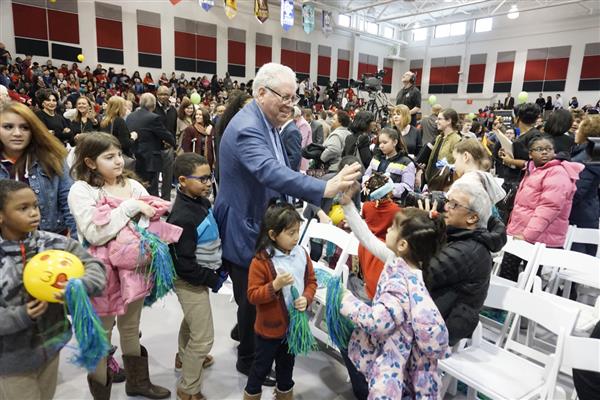 Students entering the gym did not know why they had been called together; seniors Lynnae Howard and Jasmin Diaz were unaware even as they took the stage to extend greetings to dozens of community leaders and other adults in attendance.

"People are in debt because of college," said Lynnae, who plans to attend Ashland University, another new compact member, to study forensic science or prepare for a career in the sports industry. "It's amazing we don't have to worry about that."

"I think it's going to change lives," said Jasmin, who intends to study social work at Ohio State University. "A lot of people don't have this kind of opportunity."

Under The Cleveland Plan, CMSD has seen its graduation rate reach a series of record highs, and fewer of those graduates have required remediation in college.

But the number of District graduates who enroll in college has gone down. District CEO Eric Gordon notes that Buffalo, another Say Yes chapter, has seen college enrollment rise.

“Our families don’t have conversations about going to college,” Gordon said. “Parents don’t want to promise their kids something they can’t give them.”

Say Yes Cleveland is a community effort. Besides the District, partners include Cuyahoga County, the City of Cleveland, Cleveland Public Library, Cleveland Teachers Union Local 279 and the Cleveland Council of Administrators and Supervisors, an association of District officials. Foundations and other entities provided strong support.

"When there's a challenge, we find a way to come together and make a difference," Cuyahoga County Executive Armond Budish told the students. "We're here for you, and we will not let you down."

The community is raising enough money to fund scholarships for 25 years – two generations of students. So far, more than 40 foundations, corporations, families and individuals have contributed nearly $90 million, or $15 million more than the national Say Yes organization had required to launch the chapter.

The number needs to reach $125 million. Say Yes Cleveland will seek to raise the balance over the next five years, and leaders are confident they will reach their goal.

Say Yes Cleveland is trying to create a culture around going to college or enrolling in other post-secondary training. They say the mindset is critical to keeping the region competitive in an ever-changing economy.

"Have tenancity and dare to dream big," KeyBank Chairman and CEO Beth E. Mooney, another speaker, told the students at John Marshall. "When you're done, there's a place for you in our companies."

In addition to scholarships, Say Yes Cleveland will align existing community services, in and out of school, to help students and families overcome barriers to success. Examples include tutoring, after-school programming, mental-health counseling and free legal assistance.

Every school in the District will be assigned a family support specialist, or case manager, who will customize services to families’ needs. Services will be rolled out in 15 percent of the schools next school year and be phased in at the rest over the following three years.

“The scholarships are important,” said Gene Chasin, president of the national Say Yes organization. “But the real story is the work that goes on to provide academic and non-academic support needed going all the way back to kindergarten.”

College Now Greater Cleveland will assign a mentor for each of the District’s seniors. The mentors will check in with the students by email twice a month and help connect them with internships and jobs.

The national Say Yes organization selected its fourth chapter from a field of 20 communities. The number was cut to six, and then two before Cleveland was chosen. Chasin said Say Yes looked for commitments, across sectors, to transparency, collaboration, data-based decisions and sustainability.

National Say Yes leaders worked with the community partners for more than two years on a host of tasks that included developing the scholarship model, raising money, ironing out memorandums of understanding and crafting a plan for the support services. The national organization also provided $15 million for start-up costs.

CEO Gordon said the Say Yes decision helped fulfill a promise he made after being named CEO in 2011.

"I knew 7 1/2 years ago that Cleveland would keep that promise," he said. "Dreams do come true".

CMSD and College Now counselors are being trained to help seniors apply for the scholarships. An online application will go live on Feb. 4. For more information, go to SayYesCleveland.org or call the Say Yes Cleveland Scholarship hotline, 216-454-5400.