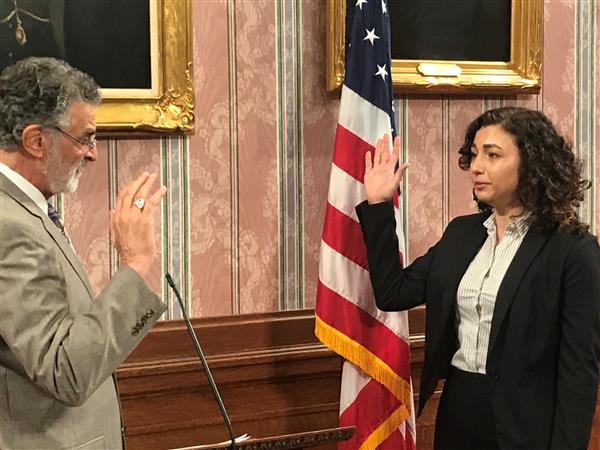 The newest member of the Cleveland Board of Education knows the road to success can take difficult turns, and she is eager to help others find their way.

Sara Elaqad, who was sworn in Friday by Mayor Frank G. Jackson, came to the United States 25 years ago from Bosnia as a refugee.

The mayor, who appoints board members, a system that is unique in Ohio, selected Elaqad from among five finalists recommended by a nominating panel. Fourteen people applied.

“She was very familiar with everything we do and all the efforts we’ve made to educate our children,” the mayor said.

Elaqad replaces Justin Monday, who moved out of the District, on the nine-member volunteer board. Her term expires June 30, but she can apply for reappointment to a full four-year term.

Elaqad, who came to America as a young child, said she looked forward to helping students work toward postsecondary education, a goal made more achievable by the arrival of Say Yes to Education.

“My parents showed me that education was something nobody could take from you,” she told school officials and others gathered for the ceremony at City Hall. “You could lose everything else, and you wouldn’t lose what you’ve learned.”

Elaqad founded the associate board of Refugee Response, a nonprofit group that assists with resettlement in Cleveland. Among those present to congratulate her Friday were Patrick Kearns, the organization’s executive director, and Emma Vogel, manager of Teen Response, a pilot program that is helping 26 refugees at CMSD's John Marshall Campus adjust to life in America.

The new board member is executive director of Minds Matter Cleveland, a nonprofit that works to close the higher education opportunity gap faced by low-income high school students through mentoring, test prep and summer college programs.

Elaqad, who lives in the Gordon Square neighborhood, also serves on the board of the Circle, the Cleveland Orchestra young professionals group. She graduated from Case Western Reserve University School of Law and received bachelor’s degrees in international relations and French from The Ohio State University.