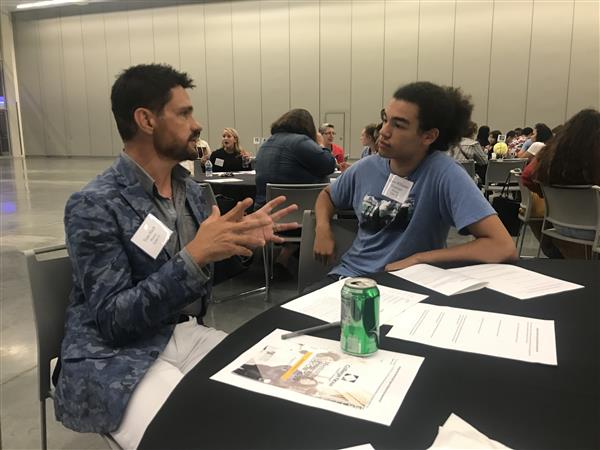 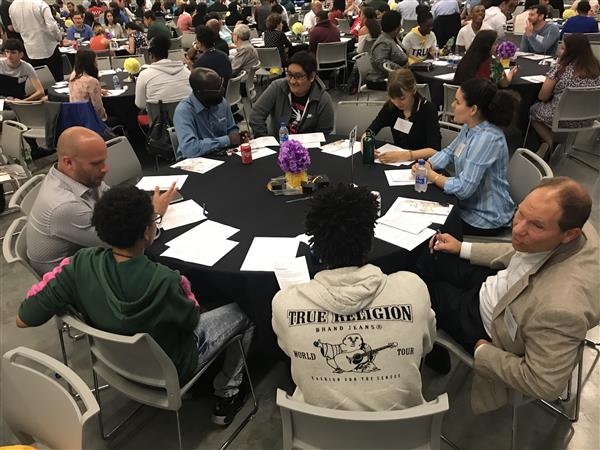 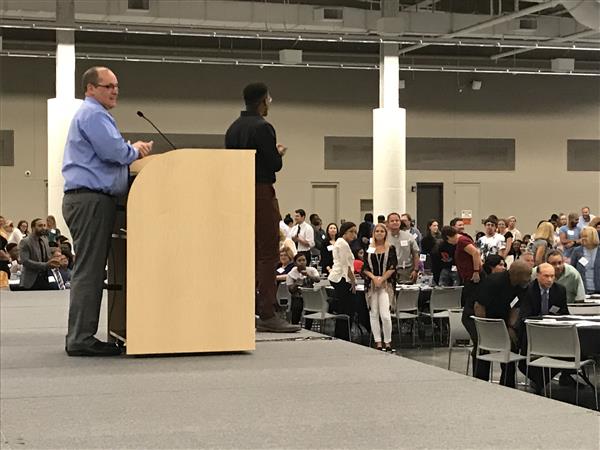 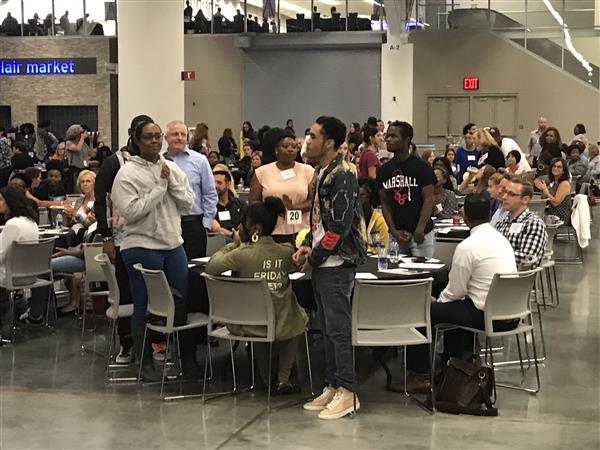 Up to 1,300 people paired off Tuesday to get acquainted and begin a journey, side by side, through higher education.

The occasion was the annual kickoff of College Now of Greater Cleveland’s mentoring program, which brought together volunteers and the new college freshmen they will guide. Most of the students were from the first CMSD graduating class to receive Say Yes to Education scholarships.

Say Yes Cleveland and College Now have matched each recipient with a mentor of like interests who will help the student persist and graduate from a college, university or post-secondary training program. Many of the students are the first in their families to go to college and can use a seasoned perspective.

“It’s an incredible sight to see the commitment of this community to work with the students and make everyone successful,” College Now board Chair Mark Ross told the audience at the Huntington Convention Center.

Mentor Tom Huck is art curator for University Hospitals, overseeing 2,800 pieces from Conneaut to Sandusky. He and mentee Cullen Williams-Freeman, who just graduated from the Cleveland School of the Arts, quickly hit it off.

Huck, a sculptor, volunteered for the four-year commitment because others supported him when he entered a field in which it can be tough to make a living.

Williams-Freeman will study at the Cleveland Institute of Art, Huck’s alma mater. He said he paints and draws portraits of people engaged in everyday life, using his subjects’ body language to make a statement about their character.

The young artist has an interest in curating and hopes, ultimately, to open a studio where he can employ local artists. He said he is “100 percent” certain Huck will be an asset.

“The big reason why is how we complement each other,” Williams-Freeman said. “We understand each other. I believe he can give me a lot of advice.”

The mentoring requires only a small investment time. Mentors check in twice a month by email, using prompts supplied by College Now to see how things are going. The mentors and students can attend three organized gatherings a year.

Say Yes to Education founder George Weiss announced in January that Cleveland had been named the fourth U.S. chapter of Say Yes. Local leaders say the program will be a game changer for a city with the nation's highest rate of child poverty and the region.

From an endowment funded with local contributions, Say Yes Cleveland will provide scholarships for up to the full value of tuition, minus federal and state aid, at all public college, universities and Pell-eligible industry certificate programs in Ohio. The scholarships also may be used at more than 100 private colleges and universities across the country.

Say Yes Cleveland also will align support services such as after-school programs and mental health counseling to help families overcome barriers to success and keep students on track to high school graduation. Services are being rolled out at 16 CMSD schools this year and will expand to remaining schools within four years.

To be eligible for a Say Yes scholarship, students must live in the District or city of Cleveland and be continuously enrolled in a CMSD or partnering charter high school from ninth grade until graduation.

For more information, go to Sayyescleveland.org.