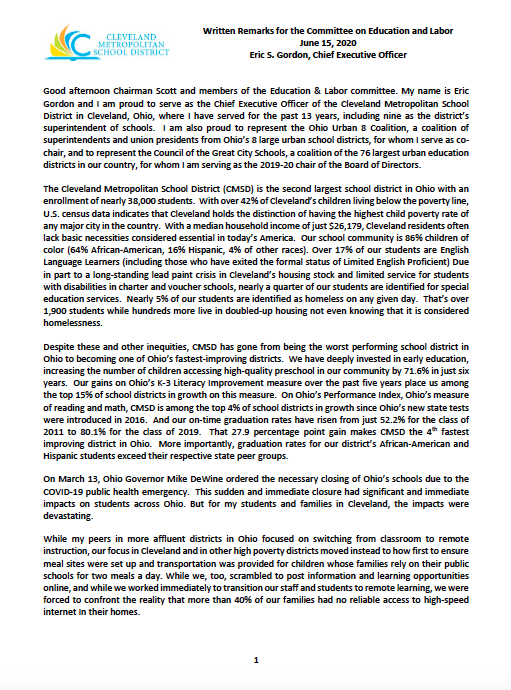 The coronavirus pandemic has cost students valuable class time and rocked school budgets, but out of crisis can come an opportunity to create a new educational system that is better and fairer for all kids, CEO Eric Gordon told a congressional committee on Monday.

The CEO pressed the case for federal funds that would stabilize schools and help districts cope with historic financial challenges. Gordon said that in Cleveland, lost state and local revenue could soar as high as $127 million and reverse progress that has turned what had been the state’s worst school system into one of its fastest improving.

“That’s nearly 25 percent of my District’s net operating budget,” he told the committee. “If this worst-case scenario were to occur, I will have no choice but to make deep, devastating cuts to my district this coming winter.”

CMSD’s first order of business after Gov. Mike DeWine closed schools to contain COVID-19 was to help feed families in a city with the nation’s highest rate of child poverty.

The District also mailed learning material to homes while distributing thousands of devices and temporary hotspots in what ranks as one of the country’s least connected communities for Internet access. CMSD and nonprofit DigitalC have formed a partnership to expand affordable Internet access, with the District bearing the cost for student households.

School districts across the country are figuring out how to continue learning and teaching while adhering to guidelines that keep students safe from the virus. Gordon said CMSD is considering a combination of online and classroom options.

Gordon said the COVID-19 outbreak has starkly exposed inequities that have long plagued Cleveland and other communities, particularly communities of color.

The CEO said the time is right for schools across the country to build new educational systems that allow students to advance at their own pace and tailor instruction to their varying needs. CMSD has been moving to such strategies in recent years.

An initial stimulus package, the CARES Act, included $13.2 billion for K-12 education. The House of Representatives has approved the Heroes Act, which allocates $58 billion for schools, but it faces an uncertain future in the Senate.

Gordon is finishing a one-year term as chair of the Council of the Great City Schools, a nationwide coalition of large urban districts. The council has called on Congress to provide $200 billion in coronavirus relief.