And with the 233rd pick in the 2021 NFL Draft, two John F. Kennedy High School juniors choose Jake Funk, running back from the University of Maryland.

Actually, the Los Angeles Rams made the selection Saturday in the Draft’s seventh round, but Jordan and Laron announced it from the stage to the crowd of fans on hand and a television audience.

“It was exciting,” Jordan said. “There were so many people.”

The students’ big moment was one of several times when CMSD played a role in Draft festivities. Members of the All-City Choir sang “Lift Every Voice and Sing” on opening night Thursday, the NFL Green helped plant a community garden at William Rainey Harper School and two other JFK students participated in a panel on mental health issues.

Rhonda Scharf, a health and physical education teacher and coach at JFK, chose Jordan and Laron to make the community pick because they are leaders in the classroom.

The student athletes, who were accompanied by their mothers, waited more than five hours to make the announcement. While they waited, they got a chance to meet and take pictures with two big names from the Browns’ past -- quarterback Bernie Kosar and running back Eric Metcalf. 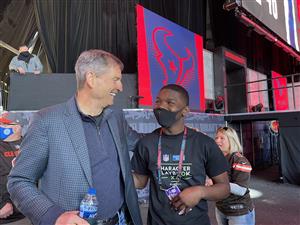 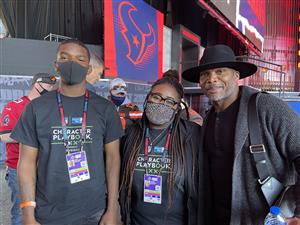