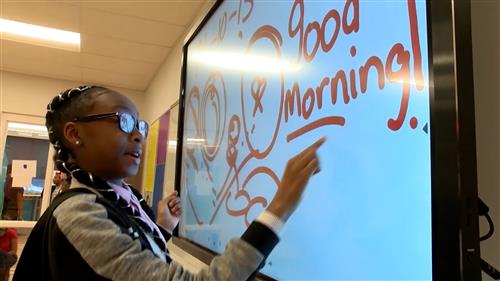 CMSD is installing interactive Clevertouch screens in classrooms as part of a two-year effort to make sure every classroom in the District has a Clevertouch.

A new school year is almost here, bringing with it a number of things that are new and different.

While most schools won’t start classes until Aug. 22, some high schools that operate year-round will welcome ninth graders on Monday and other students on Tuesday. Several other schools will return Monday, Aug. 8.

Three schools have new names. The Board of Education approved renaming the schools, following a review process that the board initiated a year ago:

The year will bring further development of CMSD’s Vision for Learning, a new approach that is designed to be more personalized, relevant and engaging for students.

The Planning and Career Exploration or PACE, program will grow as it helps all students identify careers that align with their passions and pay a living wage.

CMSD will increase the visibility of its Get 2 School, You Can Make It! Campaign, which began in 2015. The goal of the relaunch is to improve attendance that has suffered during the pandemic.