For Peng Zhou, being named a "kid science advisor" by then-President Barack Obama was the highlight of his high school career. But that certainly wasn’t the only accomplishment for the 2017 Design Lab Early College High School graduate, whose whirlwind year began with helping his robotics team win a world championship. 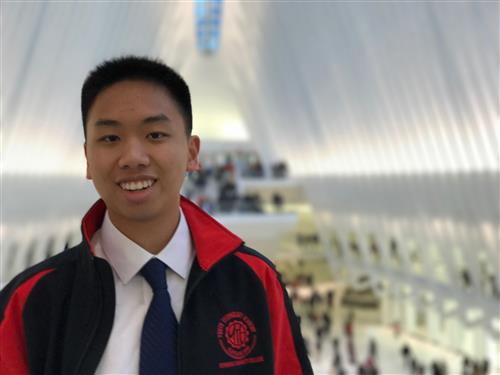 That win helped open the door for a slew of opportunities. Peng got the chance to work with the Cleveland Police Department's bomb squad to build a device to help officers scan potentially hazardous areas for threats. The all-terrain bot was unveiled at the 2016 Republican National Convention in downtown Cleveland.

To go along with his brains, Peng also has leadership skills, which shined when he hosted a youth technology event at Cedar Point and again when he was chosen as a student speaker at former U.S. Secretary of Education John B. King’s roundtable discussion event in Cleveland last summer.

Peng worked with the Cleveland Police Department's bomb squad to build a device that helps officers scan potentially hazardous areas for threats. The all-terrain bot was unveiled at the 2016 Republican National Convention in downtown Cleveland.

He did all this while taking college classes at both Cuyahoga Community College (Tri-C) and Cleveland State University his senior year. When he wasn't in class, he was working as a teaching assistant through Tri-C, where he helped teachers with classes both at the college and at CMSD schools that included Design Lab and MC²STEM High School.

This type of full schedule makes Peng feel in his element. He is also driven by his desire to reach his goal of becoming the first person in his family to go to college.

Peng’s family moved to the United States from the southern Chinese city of Guangzhou when he was just 4 years old, but Peng doesn’t see himself as an immigrant. "I feel like I belong here, this place has shaped me into who I am" he said.

Peng first discovered his passion for robotics and technology after he took an introductory robotics class as a freshman at Design Lab.

He took full advantage of the school's collection of technology and other equipment to make learning a hands-on experience. One of Peng’s favorite activities at Design Lab was using the 3D printer. He recalls making a balloon-powered car one year and competing with his classmates to see whose car could travel the farthest. Peng won.

While he spent almost all of 12th grade on college campuses, Peng said he enjoyed his time at Design Lab for its small class sizes.

“I liked going to a smaller school because you had the chance to become really close with your teachers,” he said.

This fall, Peng will return to Cleveland State University -- this time as a full-time student -- to pursue a degree in electrical engineering. He dreams of one day opening his own tech-related business because he wants to be self-employed like his parents.

Until then, he is not taking any breaks. Peng recently began an internship at Cleveland-based Rockwell Automation, which he was connected to through one of his mentors from the robotics team. Peng will spend the summer using a high-level programming language called Python to program software that will power motor controllers.

While Peng enjoyed his time in high school, he is more than ready for what comes next.