Mark Goeser graduated from MC²STEM High School but spent most of his high school years in college classrooms.

As a freshman, Mark took the ACT college-admissions test several times and in each case scored a composite of at least 30. The maximum is 36. 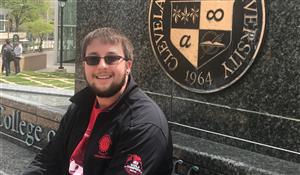 Starting in 10th grade, he took advantage of Ohio’s Post Secondary Enrollment Options program, which has since been replaced by College Credit Plus.

That allowed him to study at Cuyahoga Community College and Cleveland State University, with the credit he earned also counting toward his high school diploma. He has accumulated more than 80 college credit hours and has a 3.35 grade point average.

A resident of Cleveland’s West Park neighborhood, Mark is now a junior at Cleveland State, where he majors in mechanical engineering. He also is working in Avon as a research and development intern for Technifab, a supplier for aircraft manufacturers.

Majoring in mechanical engineering was a logical next step for a young man whose childhood love of Legos soon led to becoming a fan of the television show “How It’s Made” and a continuing fascination with function.

Mark has tried his hand at car repairs, home improvement and tinkering with drones. In 2016, he was part of a CMSD robotics team that won the FIRST (For Inspiration and Recognition of Science and Technology) Robotics World Championship in St. Louis.

"After that big win, we had this huge loss. He was such a successful person and a role model. Seeing that makes you want to carry on and do what he was going to do, and do it better."

The robotics team felt like family and provided some of his favorite high school memories. But the euphoria from the championship was less than a month old when teammate Henry D. Griffin died of an asthma attack, days before his graduation from East Tech.

"After that big win, we had this huge loss. He was such a successful person and a role model. Seeing that makes you want to carry on and do what he was going to do, and do it better" he said.

Mark had other significant influences in his life, including his mom, a nurse practitioner with four college degrees, and a stepdad who works in computer forensics.

He also credits Jeff McClellan, who was principal of MC²STEM when Mark was a freshman.

“He supported us; he pushed me to take the classes at CSU,” Mark said. “Without that support, I wouldn’t have gotten to where I am now.”