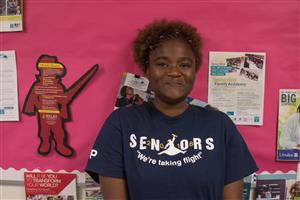 Plans for the future: Attend Xavier University, studying political science and international relations, and then go on to law school at Case Western Reserve University or Oxford. Work as an attorney specializing in international law.

Challenges faced: Stepping out of her comfort zone.

Who besides Tamara deserves credit for her success? Comes from a supportive household. Also, the Boys and Girls Club was a central influence providing wisdom and guidance and serving as a “second family.”

Quote: (On the example she hopes to set for other young people.) “I want to show them they can do whatever they want to do. I had so many people tell me what I couldn’t do. You won’t be doing this. You won’t graduate. You won’t succeed. I did it. I proved everybody wrong.”