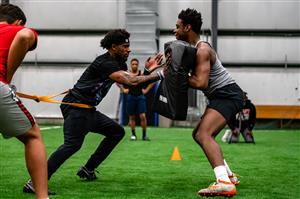 CMSD football players will showcase their talents on Sunday at the District’s first combine for recruiters from Historically Black Colleges and Universities.

“We wanted to provide a new experience for our scholar athletes and give them more opportunity to gain exposure,” said Desiree Powell, executive director for health, physical education, interscholastic athletics and student activities.

During the combine, to be held at the Cleveland Browns training facility in Berea, juniors will demonstrate their football skills through a series of one-on-one drills.

For several weeks leading up to the combine, players had the opportunity to train at Browns Fit and Raw Talent Sports.

“We wanted to make sure they had a fighting chance to be offered a scholarship and perform the combine drills appropriately,” said Harris.

Nicole Ward, the mother of Cleveland Browns cornerback Denzel Ward, will be at the combine to talk to parents about the recruiting process. Ward played football for Nordonia High School and then went on to Ohio State University.

“At times, when I was going through Denzel’s recruiting process, I felt blindsided about what to do next,” said Ward, who is the Midwest regional coordinator for the Professional Football Players Mothers Association, a non-profit organization offering support to NFL players’ families.

Ward believes having the combine at the high school level will give student athletes and their families early exposure to what it will be like to play at the collegiate level.

CMSD will hold combines in June for basketball, softball, baseball and track and field.