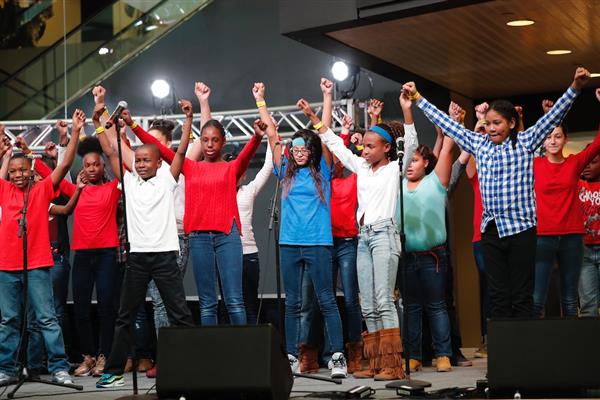 Newton D. Baker School of the Arts has received $10,000 in awards for students’ entries in the Stop the Hate contest presented by the Maltz Museum of Jewish Heritage.

A group of sixth-grade students performed their original song, “V.O.T.E”  in December in front of a panel of judges from the local music and arts community at the Rock and Roll Hall of Fame. To write the song, students worked with a teaching artist from the local nonprofit organization Roots of American Music after visiting the Maltz Museum.

The students drew inspiration from frustration they felt over the outcome of the 2016 presidential election, Newton D. Baker Principal Wendy Rose-Geiling said. When they found out that some of their family members and other citizens who were eligible to vote didn’t cast a ballot, they felt disappointed and motivated to speak out.
The result was a song with lyrics including: “Take charge of your country/It’s your civic duty/Now V-O-T-E!”
The principal said songwriting seemed to come naturally to students at Newton D. Baker, which prides itself on using art as a teaching tool.

“They’re so passionate about it, which is why their ideas are very in-depth,” Rose-Geiling said. “The contest and the songwriting gives them a voice that they sometimes feel that they don’t have.”

Jeffery Allen is the director of the museum’s education and public programs. He said the Newton D. Baker students’ message was strong and their dedication was on full display.

“What made this particular song stand out was the little extra dedication that they had among a field of exceptional songs,” he said.

The public will have a chance to see a performance of “V.O.T.E” at an awards ceremony at 6 p.m. April 26 at the Maltz Performing Arts Center at Case Western Reserve University.

The event will also feature readings from the top 10 finalists for the Stop the Hate high school essay contest, including Cleveland Early College High School Student Zephaniah Galloway. The top four essayists, to be announced that day, will win college scholarships ranging from $5,000 to $40,000.

The District is also represented among the middle school essay finalists. Essays written by Newton D. Baker sixth-grader Curt Harris III and Kenneth W. Clement Boys’ Leadership Academy seventh-grader Jeremiah Sheppard are in the top three of their grades' categories. The judges will announce what place they earned at the April 26 ceremony.

More than 1,000 students in grades 6-12 in Northeast Ohio participate annually in the Stop the Hate contests, which aim to empower students to become change agents and speak out against injustice. Each year, the Maltz Museum of Jewish Heritage gives out $100,000 in scholarships, awards and anti-bias education.

“It’s extraordinarily important that young people have an opportunity to examine history and see these historic instances of bigotry, intolerance and discrimination reflected on their own lives,” Allen said. “It helps them to realize that they, in fact, do have agency and a voice.”