Facing History New Tech High School senior Kee'shawn Jacobs has gone through periods of homelessness about four times since middle school, but the straight-A student has never let that define him. 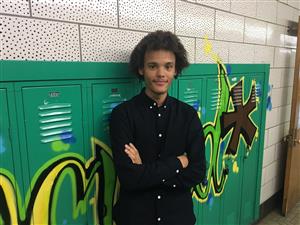 Kee'shawn is headed to Kent State University this fall to study architecture, the first step on his journey to owning his own architecture firm.

His struggles with homelessness began in sixth grade and lasted until October of his senior year. Last August just as the school year began, Kee'shawn, his parents and two sisters were evicted -- unlawfully, he says -- from their house.

It happened right when he was leaving for his shift at a restaurant. On his way out, he watched his parents and siblings pack up a U-Haul truck. After work, he didn't have anywhere to go.

He spent the next three months staying at friends' houses and kept his situation a secret from most people at school. It was around his 18th birthday that he and his family moved into a new home.

"I counted that as a birthday gift," he said.

"It was hard for me to not know where my sisters were going to sleep. I'm used to taking care of them, so not being able to communicate with them or call them to see if they're OK – that was hard."

The hardest part of being homeless was being separated from his younger sisters. Kee'shawn found solace in being able to see them at school most days, since all three attended school at the campus that's home to both Charles A. Mooney School and Facing History.

"It was hard for me to not know where my sisters were going to sleep," he said. "I'm used to taking care of them, so not being able to communicate with them or call them to see if they're OK – that was hard."

Many of Kee'shawn's classmates and teachers didn't find out about his situation until this spring when he and another student who was also homeless presented their senior capstone project on homelessness.

They shared their personal stories as well as common misconceptions about homeless people. Many of his teachers and peers were shocked to learn what he had gone through.

Rather than dwell on the past, Kee'shawn is looking ahead to college. He is starting out at Kent State as a sophomore, thanks to credits he racked up attending Cuyahoga Community College through the High Tech Academy program.

Kee'shawn thinks attending Tri-C as a high school student will give him a leg up when he gets to Kent State.

"Because of the things I've done at Tri-C, I know how to write a seven-page paper in an hour and giving speeches just comes naturally to me," he said.

He also used a 3D computer graphics program in his graphics design class at Facing History, the same one he will use in his architecture program at Kent.

While being homeless was far from easy, Kee'shawn said it taught him a few life lessons.

"It makes you appreciate it more when you're with your family," he said. "You also appreciate the things you receive from other people. I'm much more generous now."

Kee'shawn's plans for the future don't stop at owning an architecture firm. A car lover, he wants to own a different Mustang for every day of the week.

He also wants to make sure his mother never has to worry about having a place to call home. His biggest dream, he said, is to buy her a house.