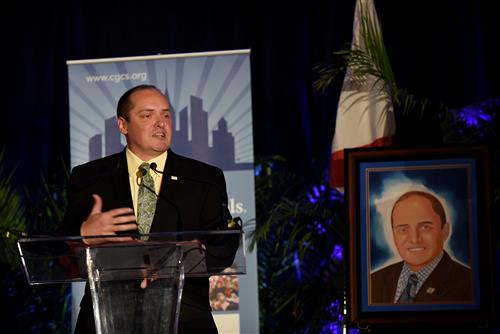 CMSD NEWS BUREAU
10/20/2016
CMSD Chief Executive Officer Eric Gordon has won the Urban Educator of the Year Award, the highest honor available to an urban superintendent in the United States.
The Council of the Great City Schools presented the award to Gordon tonight at its fall conference in Miami. The council cited the CEO's role as an architect of reforms in The Cleveland Plan and noted a rising graduation rate, growing parent participation and the District’s first enrollment increases in decades.

“Eric Gordon has made a profound difference in the lives of thousands of Cleveland’s students, helped propel a once-struggling school system forward and significantly contributed to the future of the great city of Cleveland,” said Michael Casserly, the council’s executive director. “Well done, Eric Gordon.”

Officially known as the Green-Garner Award, the honor alternates between a superintendent and school board member from the 70 large U.S. districts that the council represents. Cleveland Board of Education Chair Denise Link won in 2013.

Gordon topped a field that included eight other big-city superintendents.

He joined the District as chief academic officer in 2007 and was appointed CEO four years later. The award has gone to a superintendent three times during his tenure, and each time he was a finalist.

In 2012, Gordon joined Mayor Frank G. Jackson and philanthropic, corporate and other educational leaders in persuading state legislators to approve The Cleveland Plan and make it state law.

The plan, which has drawn national attention, calls for shifting authority for hiring and spending to principals and letting families choose from a portfolio of school models so students can find the right fit.

An independent third party, the Cleveland Transformation Alliance, evaluates District and charter school performance and makes families aware of their right to choose.

Gordon reflected on his commitment to urban education last month during a question-and-answered period that followed his annual State of the Schools address. Asked by a student to name his three most significant accomplishments, the CEO shifted the focus to his motivation.
“I feel like it matters that I work here in Cleveland for you and your teachers,” he said. “I actually at one point had left urban education, and I came back. I came back because I wanted to know at the end of the night what I had done that day really mattered.”
The Council of the Great City Schools sponsors the Green-Garner Award with Aramark K-12 Education and Scholastic Inc. The award is named in memory of Richard R. Green, the first African-American chancellor of the New York City school system, and businessman Edward Garner, who was on the Denver school board.
The award comes with a $10,000 scholarship that Gordon will present to a CMSD student.