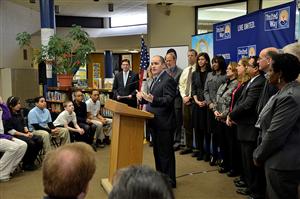 A site coordinator at each school organizes outside assistance ranging from tutoring, mentoring and arts enrichment to food and clothing. The idea is to wrap the schools in customized support that helps students and families deal with poverty and other barriers to achievement.

The schools are mostly low performing Investment Schools singled out for intensive intervention under The Cleveland Plan, a citywide blueprint for education reform. Principals are adamant that the two-year-old initiative makes a huge difference in their work, Gordon said.

“If we ask them what is the one thing you cannot give up if we scaled back … it unanimously is, ‘We cannot give up the wraparound school model,” Gordon told the audience before a panel discussion at Cuyahoga Community College’s Metro Campus.

The United Way of Greater Cleveland finances the program with $2.5 million this year -- $100,000 per school – from the District, more than 14 corporate and institutional funders and 75 individuals. Each building is paired with a lead agency that works with the school to hire a site coordinator.

United Way CEO Bill Kitson said the demand for services can seem overwhelming, even though the wraparound program operates in only a fourth of the District’s schools. He said progress will take time, but the program ties together the United Way’s three main priorities: education, personal income and health.

“They sound like three individual silos,” he said. “They’re not. They swirl together. They are critically important.”

The lead agency’s role is a natural fit for the Play House, which selects stories and themes found in the community, Education Director Pamela DiPasquale said. The Play House is paired with Adlai E. Stevenson and Robert H. Jamison schools.

Executive Director Derrick Fulton said the agency needs to solve problems like how to provide transportation for kids who attend after-school programs, but he said wraparound services have had a big impact on school climate.

Marion-Sterling School Principal Adrianna Chestnut said a partners committee meets monthly to discuss projects aligned to the needs of students and families. She said the benefits can be measured in the dozens of hats, scarves and coats recently collected and distributed to kids.

“It’s almost like our community is giving our school a hug,” she said. “All our new teachers say they have never seen a school that had this much support.”