NAEP scores among year's many highlights 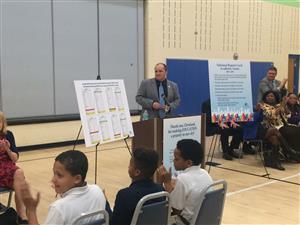 CMSD NEWS BUREAU
12/30/2015
CMSD generated a lot of news – good news – in 2015.
From growth in test scores to the crowning of a graduate as national collegiate football champion, the accent was on the positive. Here are 10 of the year’s highlights:

1) NAEP SCORES -- When results of the biennial National Assessment of Educational Progress were released in October, CMSD’s growth ranked among the strongest in the country. Results in most districts remained flat or fell.

2) ENROLLMENT -- The District’s enrollment grew slightly this school to near 39,000, the first increase in decades. CEO Eric Gordon hailed the reversal as recognition that reforms in The Cleveland Plan are working.

3) ATTENDANCE -- In July, CMSD launched a campaign – Get 2 School. You Can Make It! -- to fight chronic absenteeism, a challenge that afflicts schools across the nation. When the first semester ended in December, the District was on track to achieve its goal of a 10 percent reduction in the number of students who miss 10 or more days in a year, a very high standard.

(See 10 of the most-watched CMSD-TV videos from 2015.)
4) PARENT PARTICIPATION – The Cleveland Plan, written into state law, requires parents and caregivers to have face-to-contact with their children’s teachers at least once a year. Though the requirement carries no penalties, 80 percent of the District’s parents and caregivers complied during the 2014-15 school year, up from 73.2 percent the previous year.
5) BOARD HONORED – The city’s school board was one of three in the country to receive the 2015 CUBE Award for Urban School Board Excellence. The award recognizes excellence in governance, ability to build civic capacity, success in closing the achievement gap and working for equity in education and demonstrated success in academic excellence.

6) PATH TO APPRENTICESHIPS – The city, the District and labor leaders celebrated the opening of a new Max S. Hayes High School in August by finalizing a program that will put the career-technical school’s students on a fast track to jobs in the construction industry. The agreement, announced in March, was years in the making.

7) PRESIDENTIAL KUDOS – President Obama gave CMSD’s progress a shout-out in March after meeting with CEO Eric Gordon and other urban school leaders at the White House.

8) STEADY LEADERSHIP – To provide stability, sustain momentum and reward significant progress, the school board approved a four-year contract for CEO Eric Gordon. The contract gave Gordon his first raise in four years and would, at its conclusion, make him the longest serving Cleveland superintendent since Paul W. Briggs left in 1978.

9) NEW SCHOOL MODELS – Using $3 million from Carnegie Corporation of New York, CMSD began working in the fall on new small schools that will debut in 2016 at Lincoln-West and James Ford Rhodes high schools and make education more personal and relevant to the 21st Century. It was the second time the foundation has invested in CMSD through its Opportunity by Design program.

10) CHAMP SETS PRIORITIES – After leading Ohio State to a national championship, former Glenville quarterback Cardale Jones came home to announce whether he would turn pro. He opted to stay at the university, saying his education came first.

These are just 10 stories, and reasonable minds can debate whether others should have made the list. The opening of three new high school buildings – part of a continuing modernization program – revamp of career-tech with the help of a Ford Motor Co. initiative, the hiring of nearly 350 new teachers to fill vacancies, work on an agreement to explore collaboration with charter schools and other stories were in the competition.
Disclaimer Text
Disclaimer Text
Copyright © 2002-2020 Blackboard, Inc. All rights reserved.