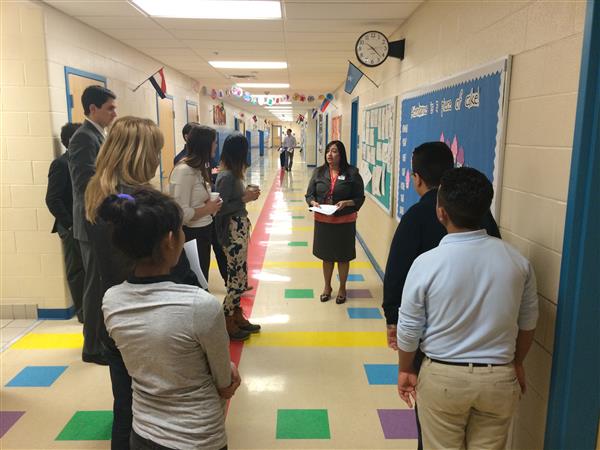 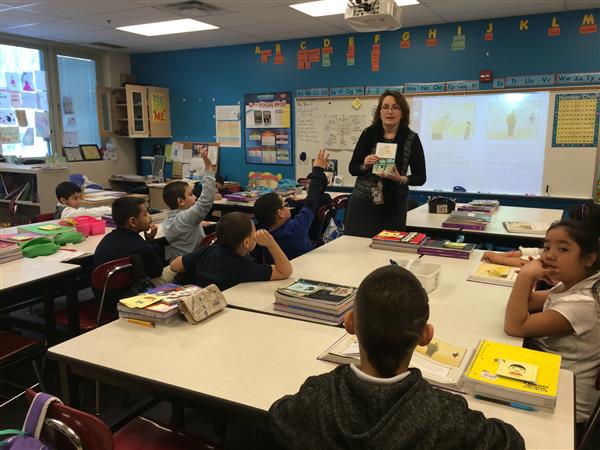 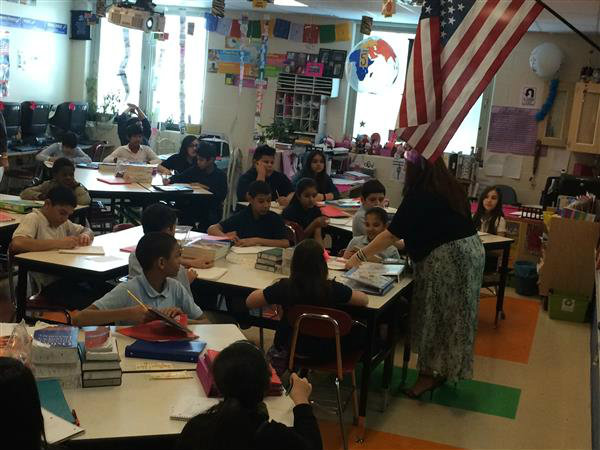 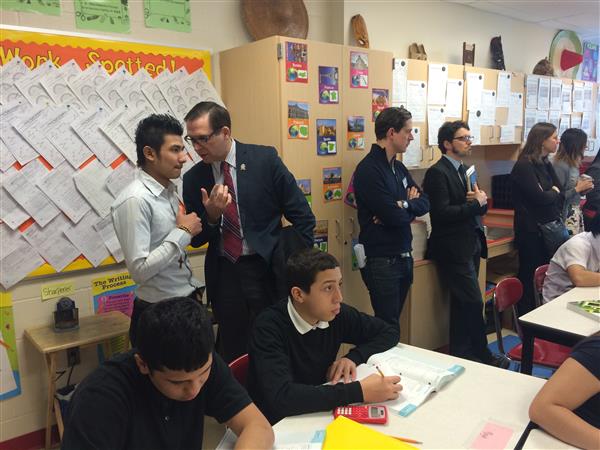 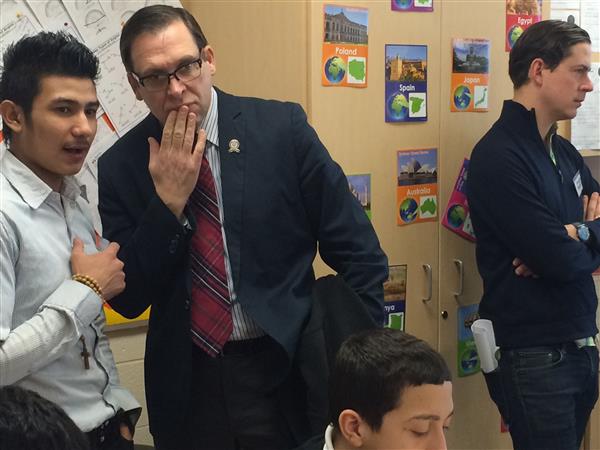 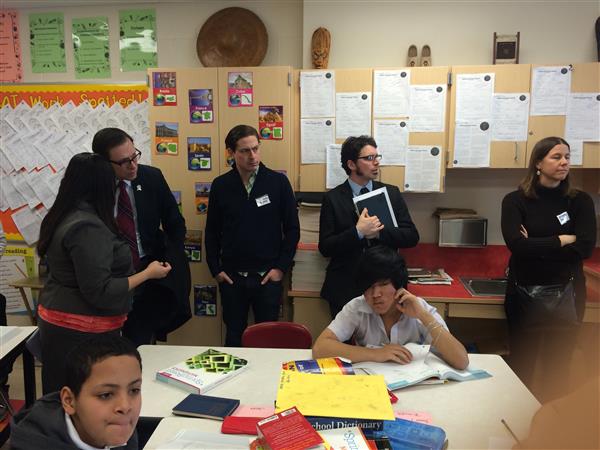 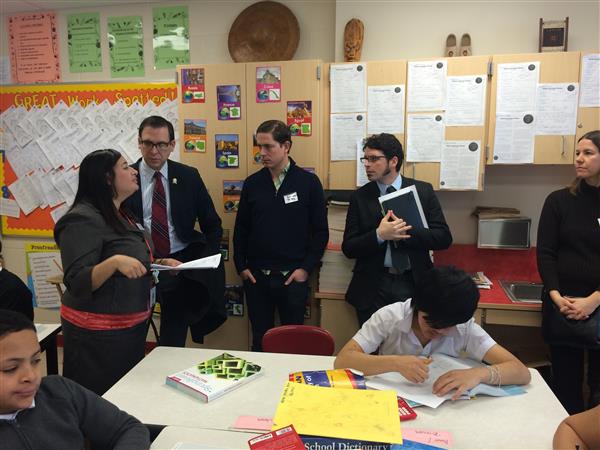 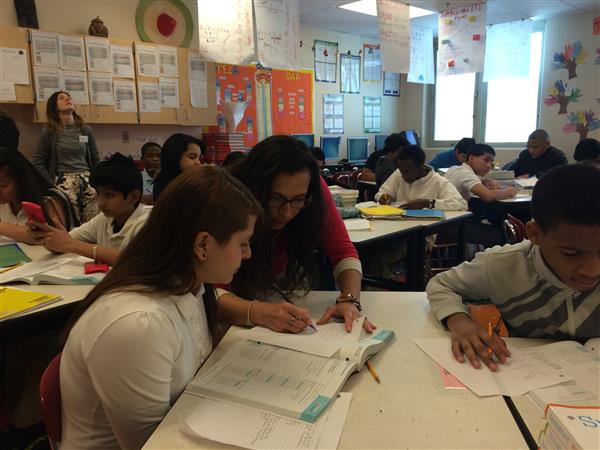 Amazement: It’s not an uncommon response from first-time visitors to the Thomas Jefferson International Newcomers Academy, a CMSD school on the West Side school where 540 students speak nearly 20 different languages but have one common educational goal.

“Wow, we had didn’t think there would be such a vast diversity of places represented here,” said Cleveland entrepreneur Graham Ford Veysey, who toured the school Friday with partner Marika Shioiri-Clark. The couple, featured recently in Cleveland Magazine, has helped revitalize part of Ohio City,  refurbishing an old firehouse that is now home to several businesses. Shioiri-Clark has made trips to Nepal and Tanzania to help empower and educate young women.

“So often we hear of the population loss that Cleveland has suffered, but we don’t see how many families are coming here from so many different places and see how that helps grow the community and the culture," Veysey said. "This school has a great feel to it. There's a lot going on here."

Or try the reaction from Darren Hamm, executive director of The Refugee Response, a Cleveland nonprofit dedicated to helping refugees become "self-sufficient and contributing members of their new communities.”

“This fits perfectly with what we do,” said Hamm, who spoke to school officials about having him and others from The Refugee Response volunteer at Newcomers Academy. “We’ve got a successful model being in the homes of some of the families new to the city, but this school is reaching them here, too, of course, and we can be a part of that.”

Newcomers Academy was showing off Friday morning for a handful of community leaders, including Michelle Davis of the Tremont West Development Corporation, Cleveland Councilman Brian Cummins and a representative of Councilman Joe Cimperman.

Samantha Peddicord, Cimperman’s Ward 3 executive assistant, set up the tour to bring attention to the innovative school and to pitch two ideas – a Friends of Thomas Jefferson International Newcomers Academy group and Cimperman’s vision of an international neighborhood for the area.

“We want to spread the word about this amazing school,” Peddicord said. “We believe they’re doing a great job here and that this international community is a key to growth and vitality of this neighborhood and the city.”

Newcomers Academy opened in the 2010-11 school year to serve a growing number of students enrolling in the district who are refugees and other immigrants and need help learning English and life in America.
]
Enrollment was about 150 students the first year, but the school keeps growing. Enrollment this school year was about 400 in August and has since swelled to 540. The school accepts students in kindergarten through 12th grade who have lived in the United States for less than a year.

"We are getting new students almost every day, and we don't know where they'll be coming from, so we try to stay flexible," she said. "Our job is to help them, to educate them, but English is not their academic language, so that's difficult from the start, but we have great teachers here."
Burgos said the school has had to bring in substitutes this year to keep class sizes down.
"We would love to have more community members involved as volunteers here," she said. "We really want to help our scholars accelerate."
The majority of the students in the school are Spanish-speaking (61 percent), but there are significant populations of Arabic and Nepali (14 percent each). The remainder speak a host of other languages, including Burmese, Chinese, Farsi, Kinyamulenge, Swahili, Urdu, Thai, Albanian, Vietnamese, Bassa, Dinka, English-Creole, French, Ukrainian, Somali, Congo, Karen or Kirundi.

Students typically stay at Newcomers Academy for about two years and then move on to one of CMSD’s other bilingual schools, where the focus expands to developing English skills at high levels.
Visitors stopped in three classrooms. There are currently 55 employees at the school for the 12 grade levels, including 32 educators certified in international language instruction and 12 paraprofessionals.
Sixth-grade teacher Lorena Coloma-Suarez and two teacher's aides worked a room with more than 40 students, keeping everyone involved in the math lesson despite more than a half-dozen languages being spoken.
A Chinese girl who had arrived that day was getting special attention while Coloma-Suarez deftly switched back and forth from English to Spanish for the majority of the students.
"It's a good class, we help each other," she said.
In another class, teacher Stacy Hubert focused on geography. "Lines that go up and down, what are they called? Latitude or longitude? Longitude!" she called out. "And the lines that go wide? What are they called?"
"Latitude!" severals students said aloud.
"That's right -- latitude-fatitude!" she called back to general laughter.
"This is a great school," Hubert said during a break. "These students work so hard and want to do so well, it makes us want to work just as hard for them."
Disclaimer Text
Disclaimer Text
Copyright © 2002-2020 Blackboard, Inc. All rights reserved.