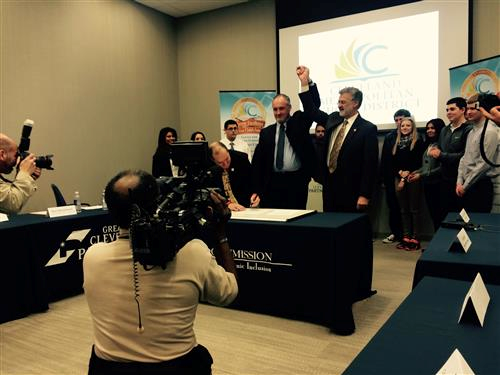 A new landmark agreement, years in the making, will help move students from the classrooms at CMSD’s Max S. Hayes High School to apprenticeships in the construction trades industry.

Mayor Frank G. Jackson and District CEO Eric Gordon joined employer and union representatives and diversity advocates for a signing ceremony Tuesday at the offices of the Greater Cleveland Partnership, a metropolitan area chamber of commerce.

“We have come together for the benefit of our young people, our children,” the mayor said.

The plan expands a “community benefits agreement,” reached two years ago to increase the numbers of local and minority workers employed on construction projects in the city. The District, which is set to embark on a half-billion dollars’ worth of construction and remodeling, has adopted the agreement.

Gordon has been working to initiate a school-to-apprenticeship program for the career-technical school since joining CMSD as chief academic officer in 2007. He said the pipeline fits well with The Cleveland Plan, a sweeping set of reforms designed to provide every student in the city with access to high-quality school options.

The CEO gave special thanks to the Cleveland Construction and Building Trades Council, which will help design pre-apprenticeship training that aligns with industry needs. The training will provide “real-world application” for Max Hayes students, said Karen Thompson, the District’s deputy chief of curriculum and instruction.

Principal Phillip Schwenk said the program will bring the future into focus for students.

“It allows us to tell kids they have an opportunity to work in the city they live in, in a field they are interested in,” he said before the signing ceremony. “If you do X, Y and Z, we can get you there.”

A dozen Max Hayes students witnessed the signing. Malik Richardson, a senior who plans to become a carpenter, agreed that the program will provide incentive.

Max Hayes is retooling its career-technical pathways as the school prepares to move this year from Detroit Avenue to a new state-of-the art building near West 65th Street and Clark Avenue. Supporters say the school could become a career-tech model for the country.

WIRE-Net, a manufacturing advocacy group, has led planning for the new school since about late 2009. The Cleveland and George Gund foundations have provided financial support.

The school, which will hold up to 800 students, will have overhead doors for access to shops, glass-enclosed locations that show off mechanical systems and outdoor spaces where students can undertake construction projects and operate heavy equipment. The 13-acre site is more than double the size of the current Max Hayes property.