CMSD NEWS BUREAU
6/4/2015
Six seniors at CMSD's Garrett A. Morgan School of Science received a total of $19,710 in scholarships from Ernst & Young LLP’s College Mentoring for Access and Persistence (MAP) program. The awards were presented to students on May 18 at the Cleveland offices of Ernst & Young.
Nearly 30 District students were involved in the College MAP program in the 2014-15 school year. Ernst & Young employees serve as mentors to students and help them commit to the transition to college.
According to the company, the program was launched as a pilot in 2009 and has expanded to more than two dozen cities, including Cleveland and other large urban districts such as Atlanta, Boston, Chicago, Detroit, New York and Los Angeles.
The program is having an impact – more than 90 percent of students who have participated in College MAP have enrolled in a two- or four-year institution, according to company figures.
The  College MAP curriculum includes monthly workshops, college visits, and tutoring tied to financial skills aimed at helping students succeed in college and make the most of their financial futures in general. 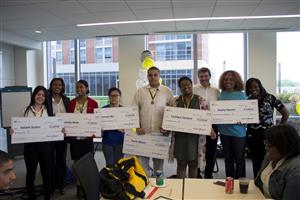