Willson School to get fitness center 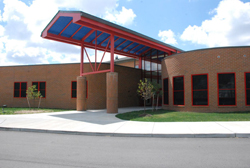 CMSD NEWS BUREAU
7/29/2016
Willson School is one of three schools in Ohio to win a $100,000 fitness center from the National Foundation for Governors’ Fitness Councils.

A former classroom will be equipped with 30 exercise stations, said John Dorotics, a physical-education teacher who applied for the grant.
The center will be used daily for physical-education classes and recess, Dorotics said. He hopes to also make the room available to the community.

The Liberty Local Schools, near Youngstown, and Glendale-Feilbach Elementary School in Toledo were the other winners.

This year’s competition focused on public elementary and middle schools in Ohio, Arizona, Washington and Wisconsin. The foundation chose the schools based on need, creativity in fitness offerings and community engagement.

Dorotics said the foundation essentially posed the two-part question: "What are you doing now and how will this help?" He said he hopes landing the fitness center will help the school obtain other grants.
"Everybody is excited," he said. "It's a very special opportunity."
Willson, located on Ansel Road near Rockefeller Park, already tends to the neighborhood’s nutritional needs by sponsoring a monthly food distribution.
The school is one of five in the District that give away food with the help of a grant that the Greater Cleveland Foodbank obtained from the Morgan Stanley financial services company. The grant, which is part of Morgan Stanley’s Healthy Cities Initiative, also can be used for physical-education equipment or activities at the schools and providing community health screenings and nutrition education.

Willson has teamed with University Hospitals and the Cleveland Clinic for health and fitness education for students, and the MetroHealth System conducts health screenings during the food distributions, which are held from 2-5 p.m. on the second Wednesday of every month. The school also has opened its gym for parents to play basketball and volleyball.
Willson was recently named one of five CMSD schools to receive Bronze Awards, the third-highest honor, in the nationwide Healthy Schools Program, sponsored by the Alliance for a Healthier Generation. The program evaluates the ways schools promote nutrition, health education and physical activity and create a healthy environment for students and staff.
Garrett Morgan High School won the Gold Award, making it the first school in Ohio to win the top honor since the program began in 2006.
Disclaimer Text
Disclaimer Text
Copyright © 2002-2021 Blackboard, Inc. All rights reserved.