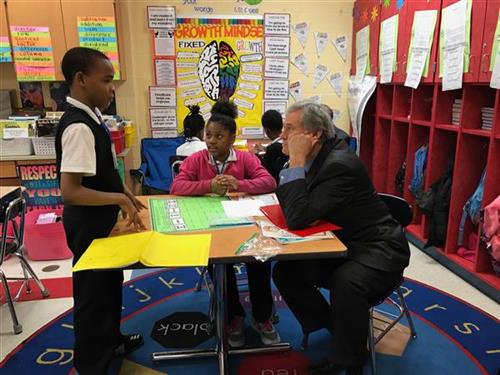 Gene Wilhoit, a member of the National Commission on Social, Emotional and Academic Development, speaks with a student at Wade Park School. The commission visited Cleveland in 2017, collecting information for a new report that calls for integrating social, emotional and academic instruction.

In fact, it was the District’s focus on SEL that prompted the report's authors, the members of the Aspen Institute's prestigious National Commission on Social, Emotional and Academic Development, to begin their fieldwork here more than a year and half ago. The commission also visited Austin, Texas, and Tacoma, Wash.

Released Tuesday, the report, titled "From a Nation at Risk to a Nation at Hope," says reseach shows that SEL -- teaching students how to manage their emotions, make responsible decisions and build healthy relationships -- can improve traditional academic measures such as attendance, grades, test scores, graduation rates and college and career success. The report also says that access to SEL should be universal.

“When all children and youth possess a full array of these skills, attitudes and values, they are better equipped to prosper in the classroom, perform in the workplace and thrive in life as contributing and productive members of society,” the report says.

The report recommends that schools, with help from communities and policymakers, do the following:

CMSD started Humanware, its far-reaching social and emotional learning program, a decade ago, after a student who had   been suspended from a high school entered the building and opened fire. He wounded two classmates and two teachers   before killing himself. The District immediately installed the "hardware" of metal detectors and security guards but also   established Humanware to get at the cause of distress and prevent future tragedies.

The report cited many types of strategies that the District has adopted since then, including integrating SEL into the academic   program, beginning with the PATHs curriculum in preschool through fifth grade; giving students a voice and leadership   opportunities; moving away from emphasis on punitive discipline and toward restorative practices; and using data to track   progress.

Recently, CMSD has begun to also stress social and emotional learning for adults, both for their own well-being and to help   them serve as models for students. The Cleveland Teachers Union has embraced Humanware, making it part of the union   contract.

"We have long supported the idea that social, emotional and academic learning must be inextricably linked for students to   thrive," District Chief Executive Officer Eric Gordon said. "If we expect children to learn, we must make sure they are in the proper environment and frame of mind to learn."

Bill Stencil, who is leading Humanware, said the report validated the program's work and that its past recognition of the District's efforts was "truly an honor."

The Washington, D.C.-based Aspen Institute brought the commission together to commence “the most important conversation about K-12 education that we have had in a generation” and make social, emotional and academic development “part of the fabric of every school.” (See a list of commission members here.)

Before the commission visited Cleveland in May 2017, Chairman Tim Shriver said that interest in mixing social, emotional and academic learning was on the rise and that dozens of school districts across the country were trying to emulate CMSD. As the two-day stop neared an end, he sounded impressed.

“The focus has shifted from a focus on academic subjects to a focus on children,” said Shriver, who also serves as chairman of the Special Olympics. “The District speaks this language, the teachers speak this language.”