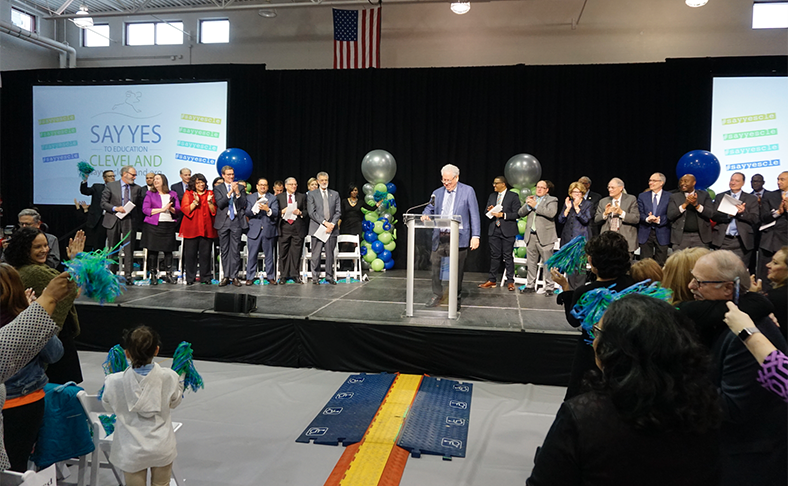 Say Yes Cleveland has selected the first 16 CMSD schools that will receive services to help students stay on track to graduation and Say Yes scholarships.

The 10 PreK or K-8 schools and six high schools (see list at the bottom of this story) were selected from among 29 schools that applied to be in the initial group. All CMSD schools will have core services by the 2022-23 school year.

“We were impressed with the commitment and strength of all 29 school teams that applied for this first year,” said Diane Downing, executive director of Say Yes Cleveland. “The selection committee was faced with difficult decisions.”

Each of the 16 schools will identify student concerns and connect the students and their families to essential services such as after-school and summer learning, mental health services and legal services. Each school will have a family support specialist.

The selection committee included representatives of public and education partners involved with Cleveland’s efforts to become a Say Yes to Education community. The partners include the City of Cleveland, Cuyahoga County, Cleveland Council of Administrators and Supervisors, Cleveland Teachers Union, Cleveland Public Library and United Way of Greater Cleveland, along with Say Yes Cleveland and Say Yes National.

School interest and commitment were critical factors. The committee then considered other criteria, including enrollment trends, state report card metrics, school and nearby community resources and student need. The committee ensured diverse representation of schools in CMSD’s portfolio.

Cleveland will make sure that core services are available in all CMSD schools within four years instead of the maximum of six set by Say Yes to Education. Another 25 percent of schools will be selected for 2020-21, 30 percent in 2021-22 and the final 30 percent in 2022-23.

CMSD schools with existing community wraparound services will continue to receive that assistance at least until they implement the core services program.

Cleveland was named the nation's fourth Say Yes to Education chapter  in January. In addition to the services, Say Yes Cleveland also will provide scholarships that eligible graduates of CMSD and partnering charter high schools can use to fill gaps in tuition for colleges, universities and other postsecondary programs. Graduates must meet residency and enrollment requirements.

As of mid-April, 2,042 students in CMSD’s 2019 graduating class had completed the Say Yes Cleveland scholarship application. Also, 1,200 people have signed up to mentor graduates through the College Now Greater Cleveland program.

The first group of schools to receive the core services include: