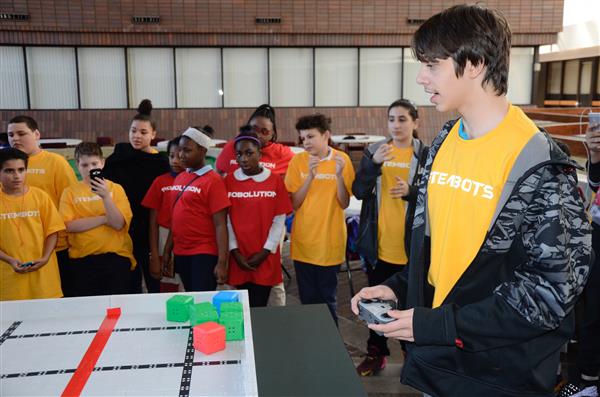 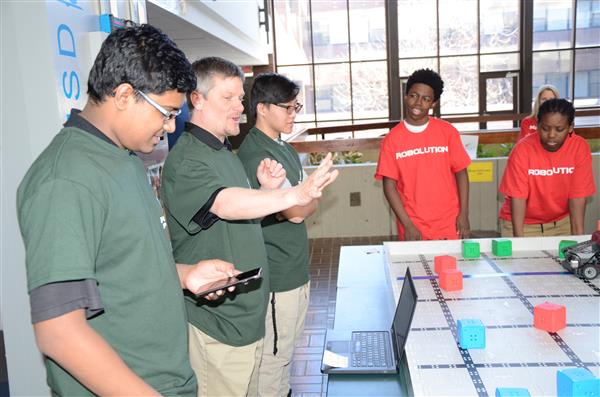 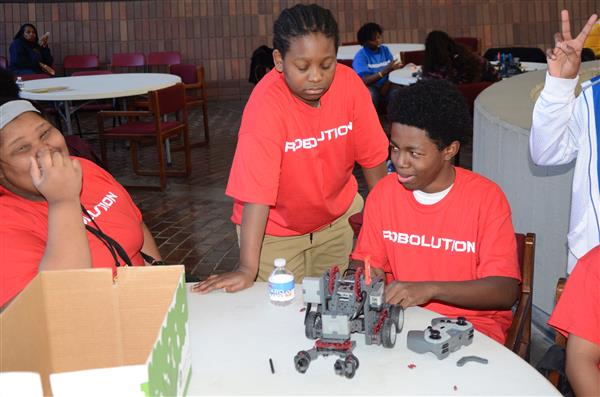 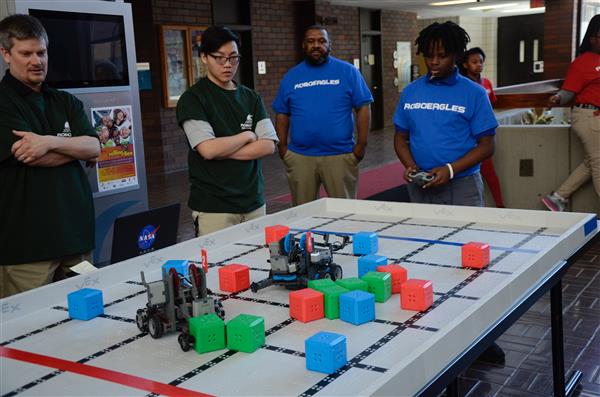 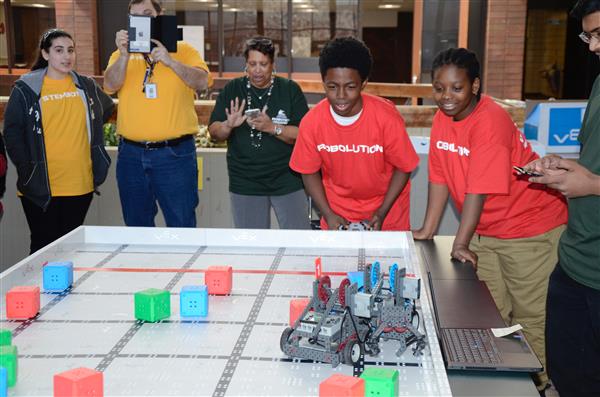 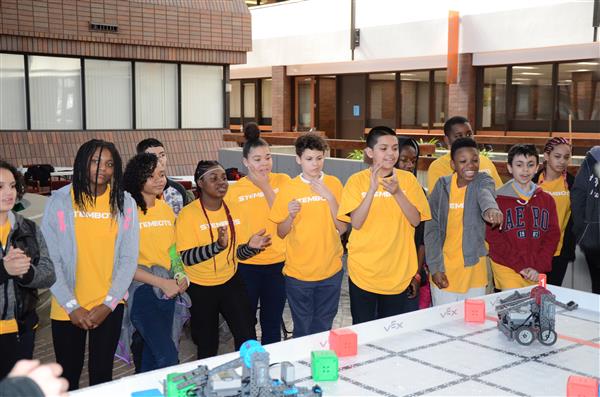 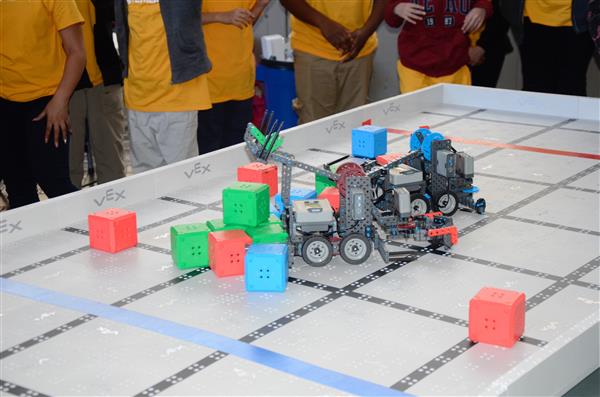 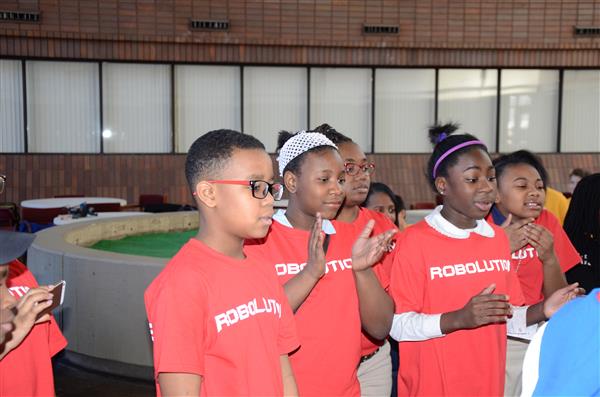 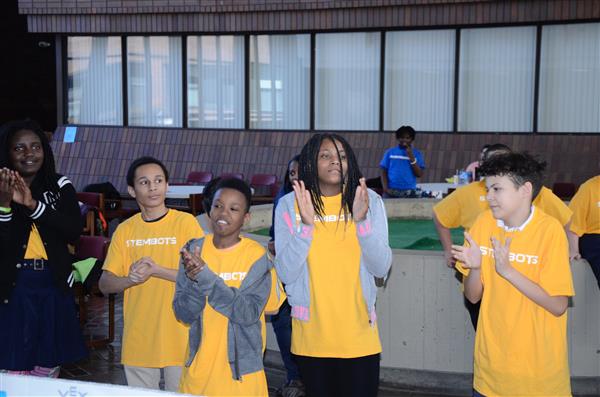 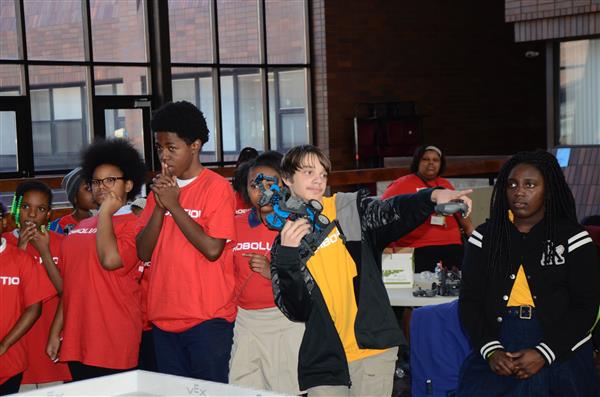 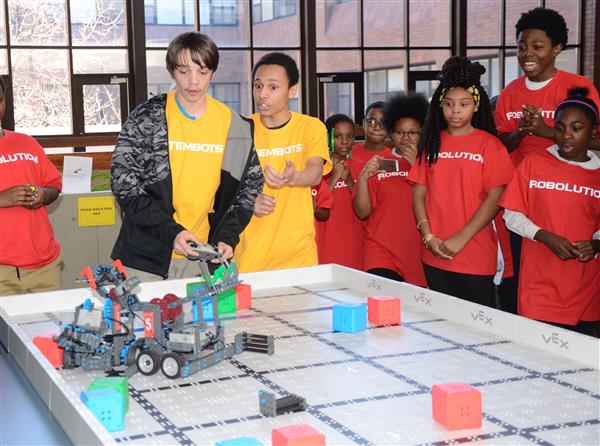 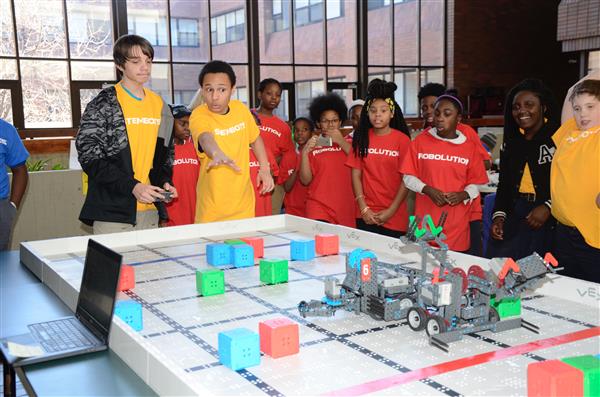 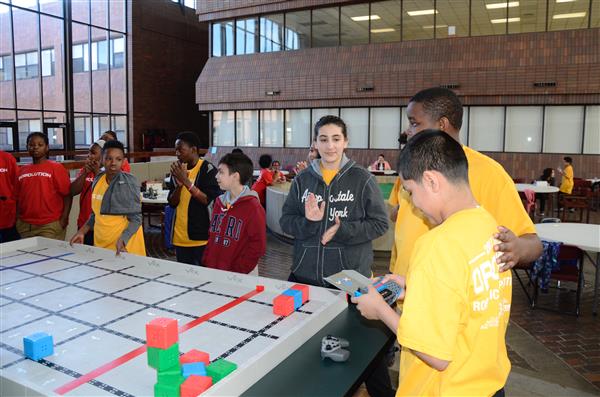 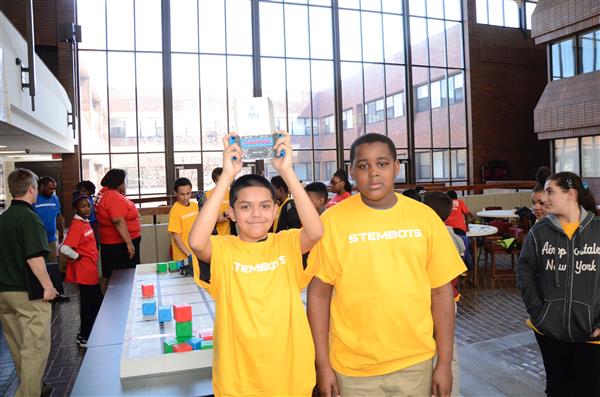 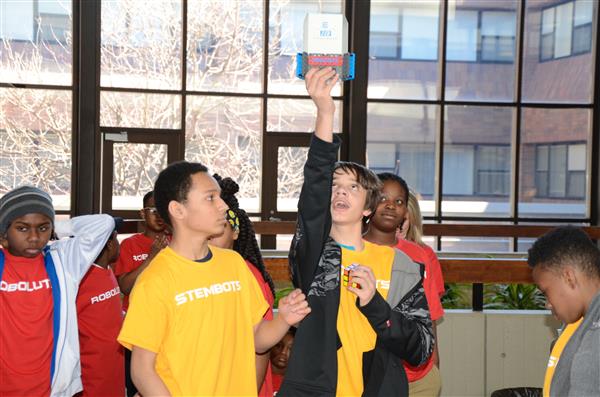 CMSD NEWS BUREAU
3/29/2017
Anyone listening to the cheering and clapping at the District’s first middle school robotics competition could have easily mistaken the event for a basketball game.

In the atrium of the East Professional Center, students shouted the names of their classmates and schools -- “Go, Jason!” and “Come on, Mound!” -- as the competitors used remote controls to make their bots pick up, carry and stack different-colored cubes to gain points. In the end, a team from Orchard School won, but it was clear every student was having a blast.


The competition was a culmination of a 12-week Vex robotics program that was recently rolled out at Orchard and Mound schools. The third school competing that day, Hannah Gibbons, started the program a couple of years ago. But this was the first inter-school competition in the District. For many students, the program was their first brush with robotics.

“This was my first time doing anything like robotics at all,” said Jason Ortiz, an Orchard seventh-grader who won first place. “At first, it was really hard, but then I started seeing there were better robots than mine so I started upgrading mine more and more, and I then came here and won the whole thing.”

The students used Vex IQ, an elementary and middle school robotics program that features plastic, snap-together parts and is designed as an introduction to STEM (science, technology, engineering and mathematics) in their names, (fundamentals and computer science concepts like coding.
Faculty at Cleveland State University's graduate engineering program trained CMSD teachers who run the robotics programs. The Verizon Foundation supported teacher training with a $17,000 grant. A $15,000 grant from KeyBank helped the schools buy the robotics kits, and the Alcoa Foundation also provided $25,000 to support the programs.
The middle school programs are the latest addition to the growing robotics movement in CMSD. High school students have already put the District on the map by bringing home a world championship last year, and two high school students who helped facilitate the middle school competition are part of a James Ford Rhodes High School robotics team that recently qualified for the Vex Robotics World Championship to be held in Louisville, KY, in April.

Adam Holtz, the teacher who runs the robotics program at Orchard, said he has been amazed at how quickly his students picked up all the necessary technical skills and how much they enjoyed it.


“From day one, I introduced the Vex robotics and we discussed career possibilities related to this,” he said. “After that, they flew with it. We got to the point where after they finished building the robot with the instructions the company gave us, the students started making their own modifications and they came up with strategies for how they could win the competition.”


Maxine Jackson of the District’s Curriculum and Instruction Department, who helped develop the middle school robotics programs, said students also learn about the importance of teamwork and responsibility and how to respectfully compete against peers at other schools. Feedback from students has been overwhelmingly positive, evidenced by the number of students who approached her after the competition to hug her or say "thank you."


“It feels extremely successful when I hear from individual students how it really made a difference for them and how much they learned,” Jackson said.

The next phase is to bring robotics into the curriculum so that it becomes part of students' classroom learning. Jackson is working with faculty at Orchard on how to use an educational robot called the Scribbler.

The Scribbler, which is already being used at Hannah Gibbons, is a teaching tool for programming, manipulating light and sound, scientific reasoning and other practical technology skills. It will be used in math and science classrooms, which means more students will have access to robotics, even if they weren’t part of the club, Jackson said.

"Once students get a taste of robotics, they want it again, and again and again," she said. "So, we're going to continue to give them these opportunities."
Disclaimer Text
Disclaimer Text
Copyright © 2002-2020 Blackboard, Inc. All rights reserved.