The Lincoln-West School of Science and Health was one of four finalists for the inaugural Deborah Vesy Systems Change Champion Award.

The award honors organizations that are changing the way organizations handle workforce development. It is named after longtime Deaconess Foundation president and CEO Deborah Vesy, who retired last year.

The Lincoln-West School of Science and Health was named a finalist for its efforts to help students navigate pathways in health care careers and to increase diversity in the field.

Lincoln-West Science and Health, a mastery-based, year-round school that opened in July 2016, is a partnership between MetroHealth and CMSD.

At the time of its founding, Lincoln-West Science and Health was believed to be the only school in the country based inside a hospital. Students get hands-on experience in health care and other careers while they are still in high school.

The students attend classes at MetroHealth’s main campus on Cleveland’s West Side and serve internships in medical and support departments in the health-care system.

All 20 members of the Class of 2019, the school’s first graduating class, were accepted at colleges.

In a Crain’s Cleveland Business article, Dr. Akram Boutros, MetroHealth president and CEO, is quoted as saying “They have taken on the responsibilities to provide pathways to these kids with a renewed focus on equity and inclusion.” 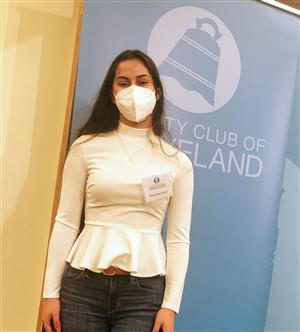