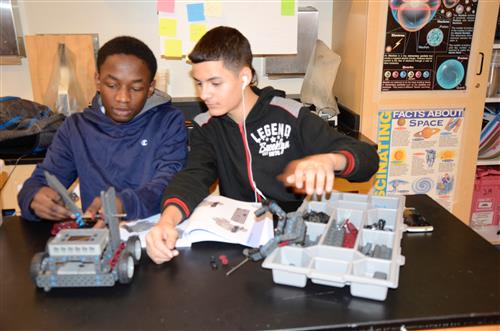 Mound, Orchard and Hannah Gibbons schools have added robotics to their extracurricular activities as part of ongoing efforts to shift their curriculum toward STEM (science, technology, engineering and math) education.

One day per week after the bell rings, around 20 sixth- through eighth-graders at each school can be found tinkering with the Vex robotics system. Students are paired up and tasked with assembling a bot, programming it and learning to drive it with a remote control. In the coming months, each school will hold a competition. The top two teams from the three schools will come together in March for the finals.

Orchard Principal Katie Francis said the hands-on, minds-on activity is meant to introduce students to a new way of thinking and spark an interest in areas that could eventually lead to jobs in engineering or similar fields.

“It’s a great opportunity to get kids to design and create. It’s a way for them to learn by doing, building and putting things together,” Francis said. “Robotics changes the way they think and prepares them for jobs that will require problem solving.”

Teachers who run the programs have been trained by faculty from Cleveland State University’s graduate engineering program.

The Verizon Foundation supported teacher training with a $17,000 grant. A $15,000 grant from KeyBank helped the schools purchase the robotics kits. The Alcoa Foundation also provided $25,000 to support the programs.

District high school students, including many who were on the robotics team that brought home a world championship last year, are also involved. They go from table to table answering the younger students’ questions and lending a hand if they’re struggling.

The high schoolers who help with the Orchard program are interns with the Youth Opportunities Unlimited Program. One of the interns, James F. Rhodes High School 11th-grader Chandradat Phalgoo, is enrolled in his school’s engineering pathway through Project Lead the Way, a career preparation program that empowers students to step into the role of an engineer and adopt a problem-solving mindset. He says working with Orchard students has been rewarding.

“It feels good to share some of what I’ve learned at Rhodes to these kids over here,” Phalgoo said. “I’m also learning something new, too, because it’s my first time doing VEX IQ.”

Vex IQ is an elementary and middle school robotics program that uses plastic, snap-together parts and doesn’t require any tools. At Rhodes, Phalgoo uses Vex EDR, a more advanced program that includes a variety of materials such as steel and aluminum.

Students say they’re enjoying learning new skills and are excited to put their bots to the test when they compete against their classmates and the other schools.

“It’s very interesting to see how these things are put together,” said Orchard seventh-grader Angela Pfister. “Though we haven’t gotten to the programming yet, I’m looking forward to doing that, since I’m interested in coding."

The after-school program is just one aspect of a larger push for STEM-infused education at these three schools, along with Michael R. White and George Washington Carver.

Maxine Jackson of the District’s Curriculum and Instruction Department is overseeing the process. She said she expects students to benefit from more STEM content in several ways, including improved behavior and preparedness for STEM courses in high school and college.

At Hannah Gibbons, teachers are already implementing robotics into their classroom lessons. There, all seventh- and eighth-graders take a course designed around the Scribbler, a robot that teaches the fundamentals of programming. With Scribbler, students learn to manipulate light and sound and develop scientific reasoning and practical technology skills. The other STEM schools are expected to start using the Scribbler curriculum in class next year, Jackson said.

Jackson calls robotics "the future of the labor market and our society." She said that in order for these schools to develop a STEM culture, an interactive activity like robotics is the best place to start.

“STEM concepts are most effective when scholars are able to immerse themselves in experiences and directly interact with their peers,” she said. "Students working with students brings about wonderful results."