New home for Culinary Arts under construction at East Tech

CMSD’s student-run restaurant, The Executive Grille,  is getting a new home at East Tech High School, including a state-of-the-art kitchen.

The $5.6 million construction project began this month. East Tech’s pool and part of a locker room will be transformed into the restaurant and classrooms for the Cleveland Culinary Arts program.

Instructor and Chef Michael Szalkowski runs the program and has taught the next generation of chefs for the last two decades.

“Our goal is to reach every Cleveland student who enjoys cooking and making dinner and let them know that this hobby can turn into a rewarding career in the future,” Szalkowski said.

The Executive Grille is currently at Jane Addams Business and Careers Center. The school board voted in 2019 to close the school and move Jane Addams students to East Tech. But the culinary program will remain until the new kitchen is ready in fall.

"It will be the leading culinary program in the region, if not the state," CMSD Chief Executive Officer Eric Gordon said.

The culinary arts students are bussed from East Tech to the restaurant to prepare food and operate the restaurant, which is open to the public.

“The students do prep work, they cook, and they bake everything that is on the menu,” Szalkowski said. “The students get a well-rounded experience. They even run the dishroom, because we clean as we cook.”

Those who dine at the restaurant love all the dishes the students prepare.

Terri Wade-Lyles, K-8 science manager in the Department of Curriculum and Instruction, is a regular customer and enjoys giving students a chance to learn their craft.

“It is nice to have the opportunity to help groom the students in a safe learning environment,” she said.

Chef and Instructor Jonathan Gardner knows about learning in that environment. He is a 2018 graduate of the culinary program and recently returned to CMSD to become an educator.

“It fills me with joy and pride to know that I have a hand in building the program,” said Gardner, who graduated from the Culinary Institute of America, located in Hyde Park, New York, in 2020. “My goal is to get the students restaurant ready.”

Ahmad, a senior, wants to travel the world trying different foods. He is also thinking about attending the culinary program at Cuyahoga Community College.

He says learning these skills in high school will allow him to pursue his dreams.

“I am just so appreciative to have received this opportunity while in high school, because I probably would have lost interest if I hadn’t started so early,” Ahmad said.

CeCe wants to become a pastry chef. She is hearing impaired but holds her own in the kitchen with the help from her sign language interpreter, Susan Todaro. 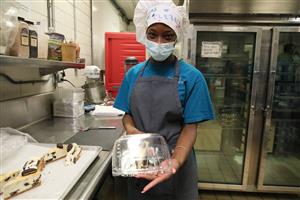 CeCe, an East Tech 11th grader, wants to be a pastry chef.

The Executive Grille is open for business on Wednesdays and Thursdays from noon to 1:20 p.m. during the second semester.